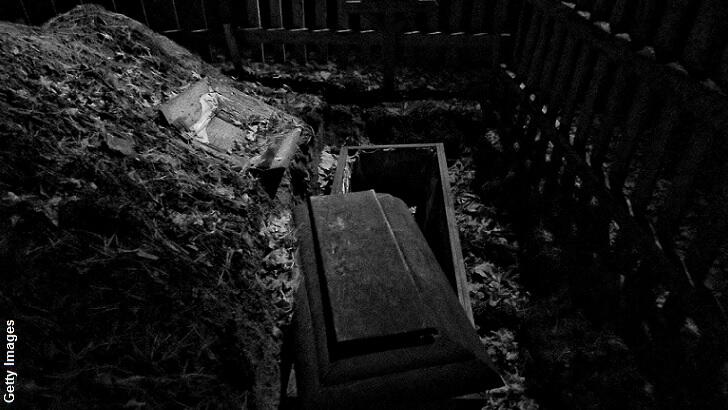 13 Days of Ghost to Ghost: The Charred Casket

To celebrate our upcoming Ghost to Ghost special on Halloween night, C2C is revisiting all thirteen installments of the annual spooktacular in the Coast archive.

Today we highlight a particularly perplexing and eerie tale from the 2005 edition of the program, when Dana in Arizona recounted an experience from his childhood which has vexed him ever since it happened.

During a sleepover at his aunt and uncle's farm, Dana and his cousin heard strange sounds outside the window coming from a graveyard that sat next to their property.

The next morning, the youngsters decided to venture into the cemetery and see what might have been behind the unexplained noises.

As they got deeper into the graveyard, they stumbled upon an unsettling scene, finding a huge pile of dirt, but no shovel, and a giant hole in the ground.

Next to the unearthed grave was a casket that had been burned to a crisp!

Chillingly, the air was filled with the smell of the burned coffin which was still warm to the touch.

Although unsure of what they would find inside, the boys mustered up the courage to open the burned box.

Dana recalled, "we looked into the casket and what should we see? Not a thing."

The confounded kids decided to enlist the help of some older children from the neighborhood in the hopes that they could figure out what to do about the bizarre discovery.

Rather than alert their parents or authorities, they decided to simply take the casket home with them!

When asked why they would do such a thing, Dana replied with the timeless retort used by kids forever: "finders keepers."

The charred casket subsequently came to rest in the barn of one of the boys, largely forgotten except for annual appearances at haunted house and other Halloween events.

"Through all these years, there's always been three questions in mind," Dana mused, "what could it have been? Damnation? Resurrection? Or just grave robbers?"

Coast Insiders can hear this story and many others from the 2005 edition of Ghost to Ghost as well as explore our complete Ghost to Ghost Collection.

Not a Coast Insider yet? Sign up now and get instant access to all 13 Ghost to Ghost specials featuring an incredible array of terrifying ghost stories told by the C2C listeners.