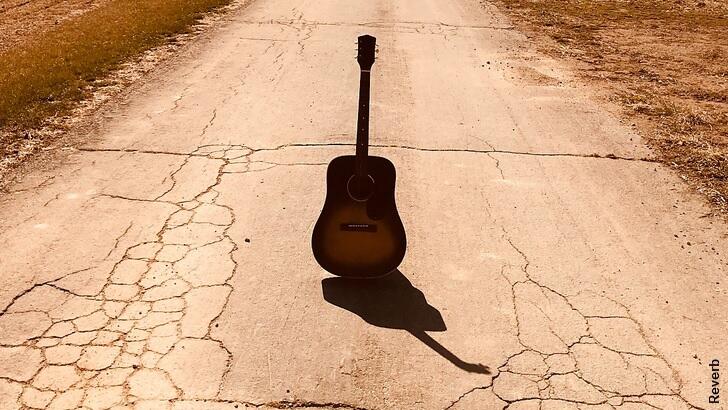 An individual out of Ohio is selling an acoustic guitar which they claim is possessed by the spirit of its previous owner and their asking price is, naturally, $666. The intriguing object has been listed on the online instrument marketplace Reverb under the eye-catching title 'Haunted Paranormal Ghost Guitar' by someone simply billed as American Vintage & Boutique Music Emporium from the town of New Lebanon. As one may have surmised, the fairly normal-looking guitar comes with quite a story attached to it.

In the wildly entertaining ad for the guitar, the current owner explains the instrument originally belonged to "a kid that lived on my street when I was growing up" and that he "was rumored to be into devil worship, seances, Aleister Crowley, Black Magic, and other dark endeavors of the spirit world." The seller goes on to claim that this young man, who was purportedly born in June of 1966, passed away at the tender age of 13 under mysterious circumstances wherein he was allegedly found inexplicably electrocuted with the acoustic guitar atop his body.

Continuing to weave a truly fantastic tale, the person selling the piece says that they acquired it from the boy's mother and, since that time, strange activity has occurred in their home. Specifically, they say that "I've heard the strings discordantly ring out, despite no one being near the guitar" and that, on three occasions, the instrument was placed in a closet only to later be found sitting on the seller's bed. The decision to sell the instrument arose, they said, after an incident in which the object floated out of a trash can where it had been "somberly placed."

Likely in recognition of the guitar's spooky condition, the owner is looking for $666 from anyone who is "brave enough to tamper with the spirit world" and dares to purchase the piece. Truth be told, the seller's story of the instrument's paranormal nature is so colorfully written that it is almost too good to be true. Though if that is the case, they deserve credit for crafting such a colorful account and, should the next owner of the piece be able to tell the tale even remotely as well, it just might be worth the asking price.