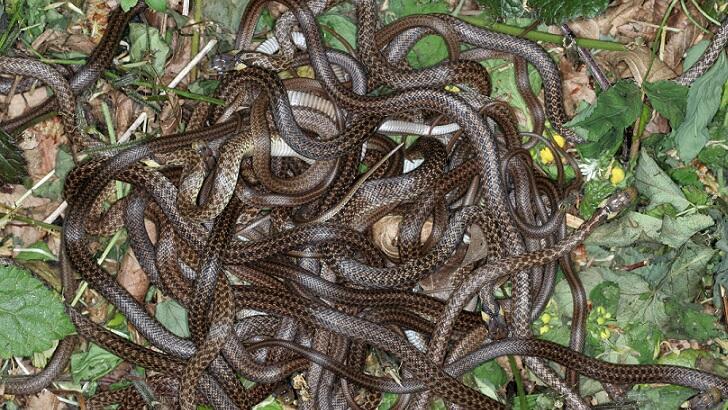 The director of a reptile rescue organization in California removed a staggering 88 rattlesnakes that had nested beneath a woman's home. The shocking case reportedly occurred last week when Alan Wolf received a call from a Sonoma County woman who express concerns that there were snakes "under her house." Her fears proved to be far from unfounded as, upon inspecting the site, the reptile rescue worker discovered a jaw-dropping 22 adult rattlesnakes and an additional 59 babies which took him a whopping three hours and 45 minutes to remove from the area.

Sharing a photo (seen below) of the unsettling haul on Facebook, Wolf indicated that he actually made two subsequent visits to the residence, wherein he retrieved another seven rattlesnakes. The seasoned reptile rescuer offered the ominous observation that 88 was only the number of creatures he could recover and that there are likely still some that managed to evade being captured. As for why the house became such a hotbed for the reptiles, he theorized that it is likely because "they built their foundation around the rocks." Unfortunately, Wolf did not reveal how the homeowner reacted to her snake suspicions being confirmed, but one wouldn't be surprised if her first reaction was to put the house on the market.