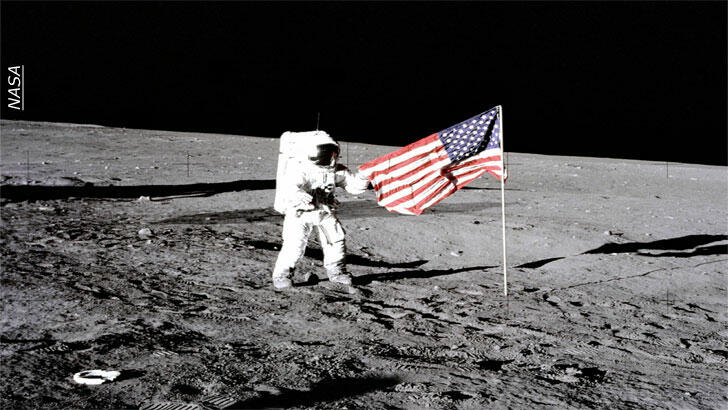 In response to an impending auction of what are being called 'lost' Apollo 11 tapes featuring the first moonwalk, NASA says that the material is not actually as precious as it is being portrayed.The strange dispute began a few weeks ago when it was announced that a former intern from the space agency planned to sell three videotape recordings from the famed moon mission which he managed to purchase for a mere $217 at a government surplus auction in 1976.

The prospect that the materials could contain heretofore unseen footage from the historic moon landing, the timing of the sale, which is to be held next Saturday on the 50th anniversary of the iconic event, and the seven-figure price that the tapes are expected to fetch at auction created something of a perfect storm and sparked headlines around the world. The furor surrounding the mysterious footage eventually grew to the point that NASA has been forced to issue a statement concerning the 'lost' tapes in an attempt to set the record straight.

According to the space agency, information relayed from the Apollo mission back to Earth was immediately recorded at a number of locations as it arrived during the historic event. The video footage, they said, was filmed in a format known as 'slow scan,' which "meant it couldn't be directly broadcast over commercial television." The films were subsequently "converted for broadcast" and then distributed to media outlets for the world to see.

With that in mind, NASA stressed that "there is no missing video footage from the Apollo 11 moonwalk." As for the 'lost' tapes set to be auctioned next Saturday, the space agency theorized that they were simply "2-inch videotapes recorded in Houston" during the process of converting the 'slow scan' footage to something able to be broadcast. Considering the multiple methods which NASA used to record all of the data transmitted from the Apollo missions, they expressed certainty that the tapes "contain no material that hasn't been preserved."

In some sense, the space agency has only themselves to blame for the convoluted mess thanks to a 2005 attempt to locate the 14 magnetic tapes which initially recorded the Apollo 11 mission and were subsequently transferred to broadcast quality footage. That pursuit revealed that some of those materials could not be found and NASA postulated that they were probably erased long ago since there were multiple copies of the material already made.

The space agency eventually held a press conference 2009 in which they explained all of this with the engineer in charge of the search saying "in case anyone thinks there is video out there that hasn't been seen, that is not the case." Nonetheless, the somewhat embarrassing endeavor seemingly spawned what has become almost a modern urban legend about 'lost' NASA tapes which feature a previously unseen perspective of the moon landing. While that would appear not to be the case, we're guessing it won't stop some wealthy space enthusiast from dropping a few million dollars next weekend on the off chance that they might.