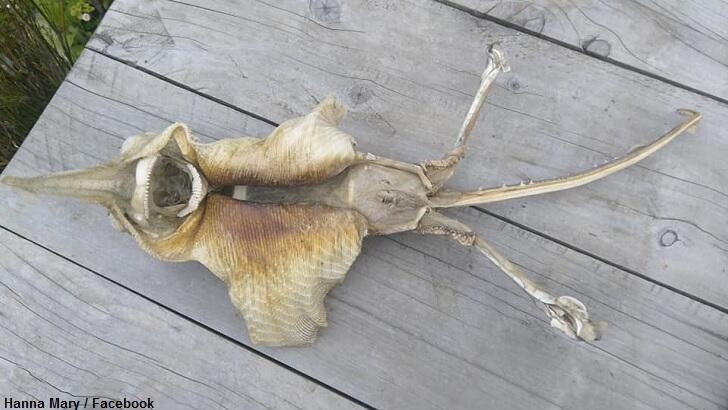 A beachgoer collecting trash that had washed ashore following a storm in New Zealand was bewildered when she picked up a piece of debris that turned to be the remains of a monstrous-looking creature. According to a local newspaper, Hanna Mary made the strange discovery as she and her mother were cleaning up around an area known as Rakaia Huts. Their good deed took a ghastly turn, however, when Mary removed what she thought was plastic stuck in some sticks and soon realized that it was something far more bizarre.

"My first thought was that it was something alien," she said, "but I was more fascinated than anything." In a testament to her curiosity, Mary decided to take the odd creature with a menacing mouth and frightening claws home with her, despite initially being concerned that it could be poisonous. After her taxidermist friend could not identify the creature, Mary posted pictures of the 'sea monster' to her Facebook page to see if her online circle of friends could solve the mystery.

Fortunately, a scientist with New Zealand's National Institute of Water and Atmospheric Research was able to provide an answer. Dr. Malcolm Francis revealed that the creature is, in fact, a New Zealand rough skate which he likened to a flat shark as it "has a skeleton made out of cartilage." Shedding light on the animal's unique appearance, he explained that its leg-like appendages are actually claspers used in mating. As to how it wound up on the beach, Francis theorized that it was caught by a fisherman and subsequently tossed back into the water.