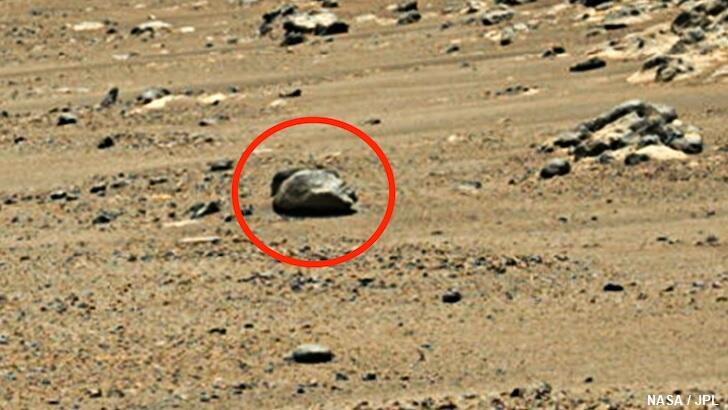 An anomaly hunter studying NASA images from Mars believes that he spotted the remnants of an alien statue on the surface of the Red Planet. The curious find was made by indefatigable UFO researcher Scott Waring as he was examining pictures that were captured by the space agencies Perseverance Rover. In one of the photos, the eagle-eyed investigator noticed a peculiar rock which, he contends, is actually evidence for an ancient extraterrestrial race that once lived on Mars. The anomalous object appears to be the side profile of a face complete with eyes, nose, mouth, and lips.

This visage, Waring argues, "looks far from being human" and notes that the "side cheekbones are thicker and wider than humans" and that "the upper front cranium comes out further than ours," As such, the researcher suspects that the oddity is a carved depiction of an ancient Martian. Observing that the potential statue head appears to be approximately three feet across and speculating that it might be "thousands of years old," Waring theorizes that it may have served as a burial marker akin to a tombstone here on Earth.

The anomaly hunter dismissed the notion that his discovery is merely a trick of light and shadow, positing that he is "100% correct" in his analysis and that, as such, the weird rock constitutes "absolute undeniable proof that ancient aliens did once exist on Mars." Of course, skeptical observers will beg to differ and put forward the more reasoned opinion that the 'alien statue head' is merely the product of pareidolia. With that in mind, what's your take on the intriguing find? Is it proof that Mars was once the home of intelligent beings or is it simply a rock that looks like a face? Share your thoughts with us at the C2C Facebook page.