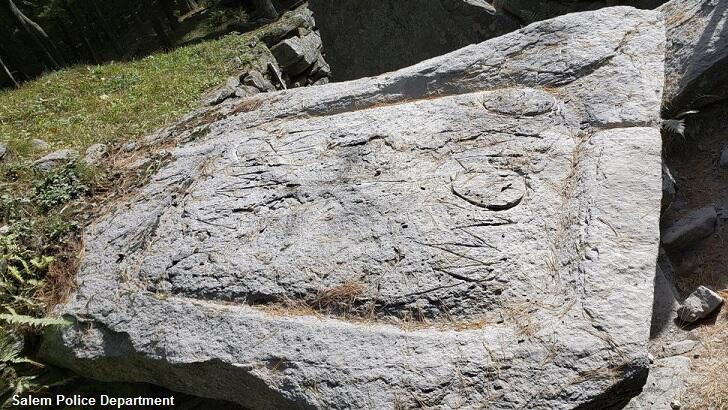 A sacrificial stone tablet at America's Stonehenge in New Hampshire was the target of a brazen and bizarre act of vandalism over the weekend. Owner Dennis Stone reportedly discovered the damage on Sunday afternoon when he first spotted a strange wooden cross strung between two trees. He subsequently saw that someone had carved writing into the massive rock presumably using some kind of power tool. Additionally, the perpetrator had apparently knocked the stone over with a sledgehammer.

The cross found at the site was particularly perplexing and somewhat unnerving as it had pictures of a child, a man, and two sketches, one of which was the Statue of Liberty, attached to it. As for the writing on the sacrificial stone, it's difficult to discern what the letters are supposed to say, but Salem Police Deputy Chief Joel Dolan indicated that Stone "classified the markings as anti-Masonic." As if all this weren't weird enough, authorities have also suggested that the unsettling act of vandalism may have actually been a reenactment of a scene from a fictional story featuring America's Stonehenge.

Located in the city of Salem, the popular tourist attraction consists of ruins believed by some to be thousands of years old. The site earned its lofty title by way of its mysterious origins and astronomical alignment, which led to many likening it to England's iconic stone monument. Fortunately, despite the damage done to the sacrificial stone, the location remains open to the public. Authorities are asking for any tips on who may have been behind the nefarious deed and are also hoping to identify the people in the pictures, since this could serve as a critical clue in the case.

Coast Insiders can learn more about America's Stonehenge by checking out the 4/20/2017 edition of C2C featuring Dennis Stone talking about the mysterious site. Not a Coast Insider yet? Sign up today.