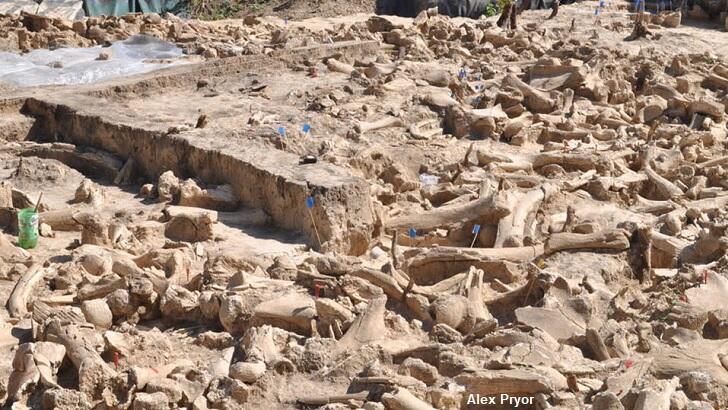 A team of archaeologists in Russia have found the remnants of a mysterious ice age structure that was built out of mammoth bones. The remarkable discovery was reportedly made near the village of Kostenki in the Russian Plains. The circular site is believed to be around 20,000 years old, measures 30 feet by 30 feet, and the walls of the structure were constructed out of 64 skulls from the iconic pachyderms as well as 51 lower jawbones.

Although around 70 similar sites have been found in Russia and Ukraine in the past, this particular structure provided new insight to archeologists as, for the first time ever, evidence of human activity was discovered in the domicile. Specifically, the ice age-era edifice contained charred wood and soft plant material. The archaeologists studying the site argued that this would seem to indicate that the people living in the area during the period were able to forage for food despite the harsh conditions of the time.

"These finds shed new light on the purpose of these mysterious sites" marveled lead researcher Dr. Alexander Pryor, "archaeology is showing us more about how our ancestors survived in this desperately cold and hostile environment at the climax of the last ice age." To that end, the archaeologists studying the site posited that, contrary to the longstanding idea that these structures served as long-term residences, the nature of the materials found inside this new location suggests that they were more likely temporary shelters.