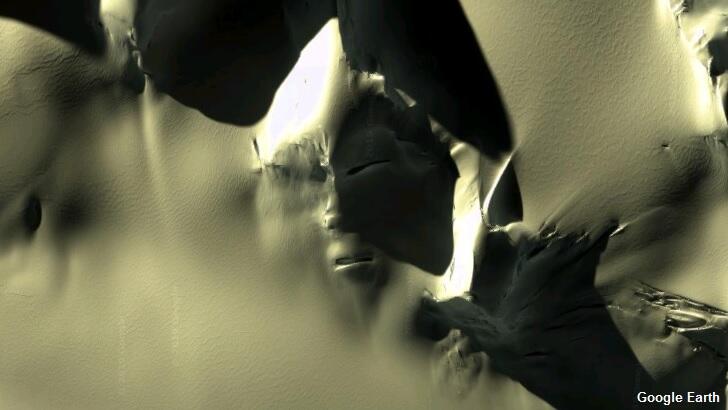 An anomaly hunter scouring Google Earth for unusual sights stumbled upon a curious spot in Antarctica which gives the legendary 'Face on Mars' a run for its money. The weird find came to light on August 20th when it was posted on the Instagram account 'ufo_scandinavia.' While looking at Google Earth images of Antarctica, the researcher noticed what appears to be a rather sizeable face standing out amid the frosty mountainous terrain.

Sporting what seems to be a proportionate set of eyes, a nose, and a mouth, the eerie 'visage' has captured the imagination of conspiracy theorists who contend that Antarctica is home to all manner of esoteric secrets. Numerous observers were quick to note that the potential face bears an uncanny resemblance to the famed 'Face on Mars' that is said to sit in the Cydonia region of the Red Planet and was first photographed by NASA's Viking 1 back in 1976.

While one can be forgiven for thinking that the 'Antarctic Face' is a clever photo manipulation, a quick check of Google Earth indicates that, indeed, it can be found at the coordinates 72° 00' 36" S, 168° 34' 53" E. Although the anomaly is genuine in the sense that it was photographed by Google Earth, skeptics will undoubtedly say that the 'face' is simply a case of pareidolia and not a mysterious long-lost monument hidden beneath the snow. What's your take on the strange discovery uncovered by the anomaly hunter? Share your theory at the Coast to Coast AM Facebook page.