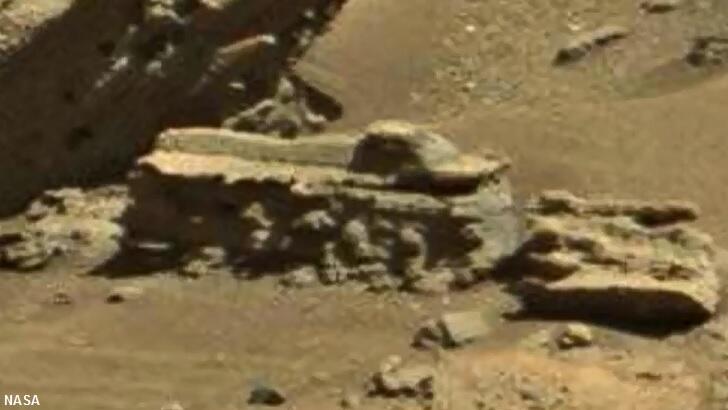 An anomaly hunter studying NASA images of Mars believes that he has found evidence of a tomb sitting on the surface of the Red Planet. The odd discovery was made by the indefatigable Scott C. Waring of the website ET Database as he was examining photographs taken by the Mars Curiosity Rover from 2016. Despite having previously looked at the images when they were initially released, the rogue researcher was taken aback when he noticed something that had somehow slipped past him at the time.

"Right there in the center of a photo," he marveled, was a box-like object which he suspects is some kind of tomb. According to his measurements, the vault looks to be around seven feet long and sports a cover that appears to be "slightly raised in one corner," suggesting that the oddity is hollow. Waring also notes what he contends are sculptures on the sides of the alleged tomb. Never one to mince words about his sensational discoveries, the anomaly hunter declared "that the find is absolutely 100% proof that intelligent aliens one thrived on Mars."

Skeptics will, of course, counter Waring's claims with the argument that the 'tomb' is actually just a rock and that any special significance associated with the stone comes from the mind of the observer and not the object itself. What's your take on the weird find? Is it, as Waring says, evidence of a lost Martian civilization or merely a trick of light and shadow? Share your take on the anomaly at the Coast to Coast AM Facebook page.