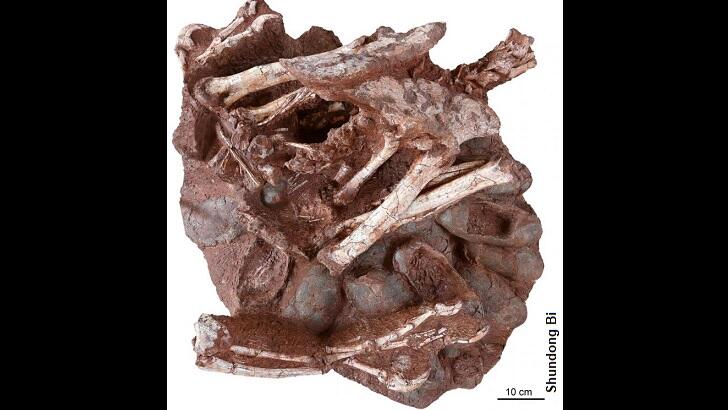 For the first time ever, archaeologists have unearthed the fossilized remains of a dinosaur that perished while sitting atop a nest of nearly-hatched eggs. The remarkable find was reportedly made by a team of researchers studying a 70-million-year-old layer of rock located in the city of Ganzhou. Much to their profound surprise, the chunk of ancient Earth included what is believed to be a bird-like dinosaur known as an oviraptorid crouched atop a cluster of approximately 24 eggs, some of which possess fossilized embryos within them.

Noting the significance of the discovery, team member Dr. Shundong Bi marveled that "this is the first time a non-avian dinosaur has been found, sitting on a nest of eggs that preserve embryos, in a single spectacular specimen." Based on the state of the unhatched oviraptorids, researchers believe that they were likely at a late stage in their development and that, at the time the group died, the parent dinosaur was probably incubating them in a manner akin to modern-day birds. This theory was bolstered by oxygen isotope tests which found that the eggs were kept at a high temperature.

The incredibly rare find is of particular interest to scientists because, unlike the vast majority of dinosaur discoveries, it shows what they describe as "fossilized behavior" that provides insight into what the oviraptorid was doing at the moment of its demise. To that end, team member Dr. Lamanna observed that "this dinosaur was a caring parent that ultimately gave its life while nurturing its young." As if the specimen was not significant enough, archaeologists indicated that they also found pebbles in the abdomen of the adult creature which it likely had swallowed to aid digestion. The small stones, known as gastroliths, had never been definitively found within the remains of this type of dinosaur before now.