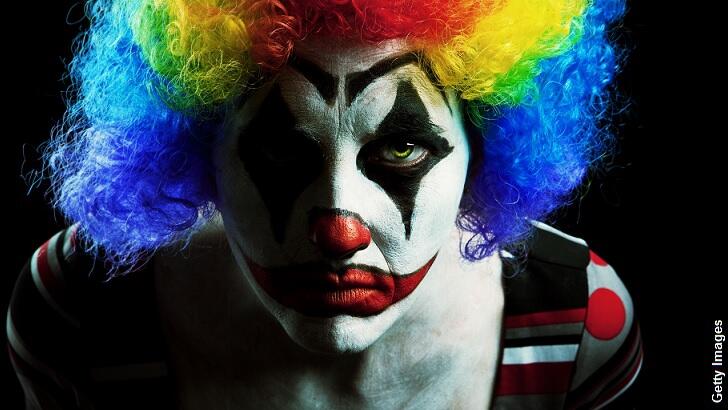 Are Creepy Clowns Coming Back?

A pair of recent incidents, in the United States and abroad, suggest that the scourge of creepy clown sightings over the past few years may be back on the upswing with summer set to start soon. The first trouble case occurred in Washington State last week when, according to a report, cops were called about a clown mask-clad individual lurking near a school playground and "making some sort of gesture toward students." As one can imagine, police were swift to respond to the strangeness at the school.

However, when authorities had arrived, the creepy clown had vanished almost like a phantom. A mere four minutes after the call was placed, police were on the scene and the individual was nowhere to be found. And, perhaps even more perplexing, cops obtained camera footage from a variety of locations surrounding the school and they apparently failed to capture any sign of the clown. While one could chalk the entire incident up to a brief flash of misperception combined with mass hysteria among frightened kids, an eerily similar case from the Netherlands makes one wonder if there is something more unsettling in the air.

In the Dutch city of Arnhem over the weekend, a group of children on a playground reported seeing a "killer clown" hanging around the area for a whopping three hours. The murderous designation fits in this case as according to one witness, "in the beginning, he just waited, but he kept coming closer and had knives with him." The clown's advancing approach and weapon obviously terrified the kids and they quickly took off running. The mysterious stranger also fled the scene by vanishing into a nearby forest. And, once again, cops of the scene were unable to apprehend the clown.

It may be too early to say if the couple of clown encounters in two vastly separate locations over the last week constitute a comeback for the phenomenon that gripped the country and, later, the world a few years ago. That said, should clowns continue to pop up in other disparate locales with a similar frequency, the case could be made that clowns are, indeed, coming back. Why, exactly, they are returning may be a more difficult and worrisome question to answer.