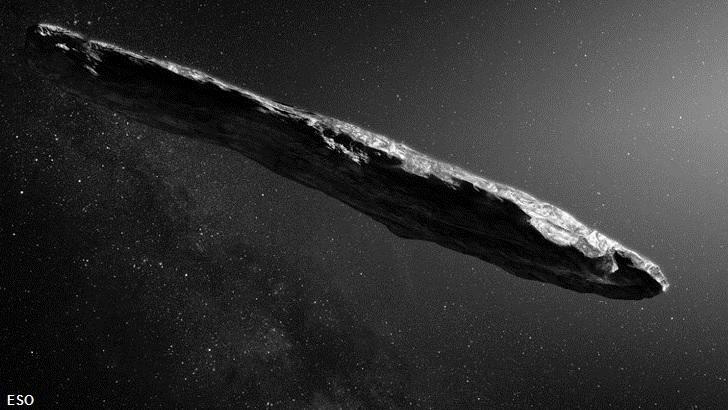 Astronomers Argue 'Oumuamua' Could be an Alien Solar Sail

An intriguing new study concerning the mysterious interstellar asteroid known as 'Oumuamua' offers a rather remarkable suggestion: that the oddity could be an ET-designed 'solar sail.' The peculiar object first burst onto the scene at around this time last year and has spawned considerable speculation not unlike the notorious 'alien megastructure' which has become a veritable cause célèbre in the world of space mysteries. Attempts to scan the object for radio signals came up short and astronomers ultimately seemed to decide that it was most likely a comet, but a recently-published paper proposes that there may be an alternative explanation that opens the door, once again, to aliens.

Looking at Oumuamua's trajectory and velocity, a pair of astronomers from Harvard say that the object might actually be a light sail which is propelled by radiation pressure from the sun. Particularly intriguing to the researchers was that the object was observed accelerating as it left our solar system which seemed to conflict with it being a comet. Coupled with Oumuamua's odd shape, they argue that the 'light sail' hypothesis has proverbial legs, although the researchers did note that this phenomenon could develop naturally in space in the form of a "proto-planetary disk" or something similarly prosaic.

Setting aside those more mundane possibilities, the astronomers entertain the notion of, if Oumuamua is alien in nature, how it would end up in our solar system. To that end, they theorize that it could be debris from another civilization or, more fantastically, that it is some kind of alien probe. While such a scenario would be pretty awesome, one can't help but worry about what it might mean that the last time we saw the 'alien probe' was when it appeared to be trying to get away from here and fast.