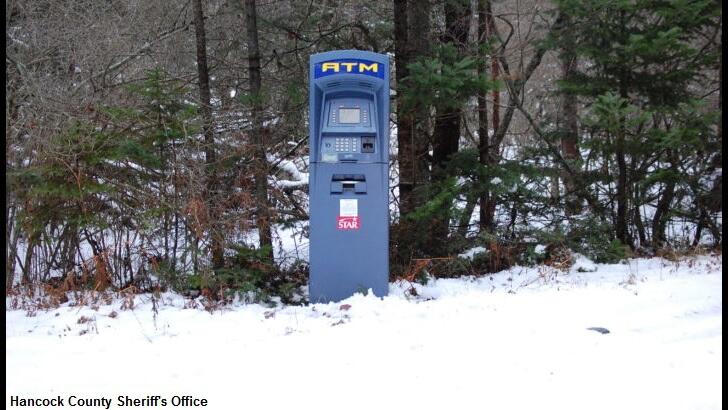 A woman in Maine who was out for a walk one morning last week stumbled upon a strange sight that has left authorities baffled: a perfectly intact ATM sitting at the edge of a forest. According to a local media report, the bizarre find was made in the town of Deer Isle in a rather remote location more than a half mile off of a dirt road. Upon seeing the out-of-place cash dispenser, the woman promptly phoned police with news of the weird discovery.

Upon arriving on the scene, Detective Steve McFarland easily spotted the ATM standing out among the otherwise picturesque wilderness around it. "It was set up like a hunter might need quick cash for a cup of coffee in the middle of the woods," he observed. While clues concerning the origin of the machine were scarce, McFarland noted that there were footprints in the snow around the ATM which indicated that a group of people had deposited the machine in that particular spot.

But what left the seasoned detective scratching his head was the condition of the ATM as it appeared to be perfectly fine and there had seemingly been no attempt made to get the cash inside. This is quite unlike other incidents involving the theft of such machines, he explained, as "usually they are just thrown out into the woods, ripped open and smashed to pieces" with the money inside removed. Another perplexing aspect of the case is that the county sheriff's office has received no reports of any business having an ATM stolen.

With that in mind and in light of the machine looking like it is a few years old, McFarland opined that perhaps the appearance of the ATM in the wilderness had a less sinister explanation than a heist gone wrong. "I am thinking it was discontinued from service," he theorized, "and somebody wanted to get rid of it and thought it would be a good joke." Fortunately for the possible pranksters, the detective expressed some appreciation for the stunt and said that he would probably not charge anyone with littering if they'd just come and take the machine away now that their hijinks have gotten the attention they were seeking.