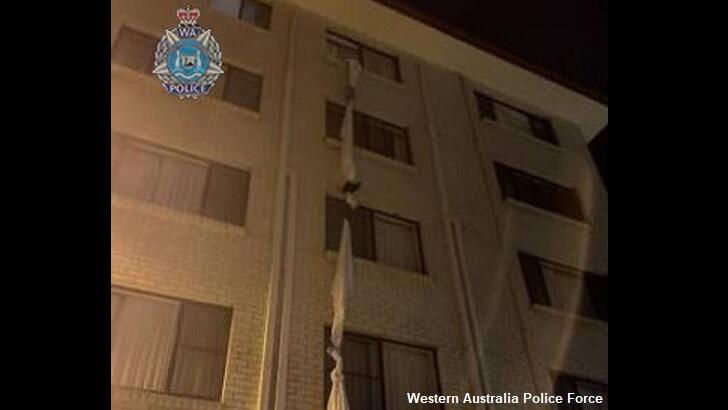 An Australian man ordered to quarantine in a hotel as part of the country's strict efforts to thwart the spread of the coronavirus wound up in trouble with the law when he staged a rather daring escape from the building by way of a rope made of bed sheets. According to the Western Australia Police Force, the bizarre incident began when the unnamed traveler arrived in the state on Monday afternoon. Unfortunately, he did not possess an appropriate exemption for the country's pandemic-related travel restrictions and was thus remanded to a hotel for the night with instructions to leave the state within 48 hours. However, the man had other plans in mind once he arrived in quarantine.

In a Facebook post showcasing his handiwork, authorities explained that the traveler fashioned a rather lengthy rope out of bed sheets and managed to shimmy his way down to the ground from his room on the fourth floor. Although he subsequently fled the scene on foot, he left behind his somewhat comical means of escape and police eventually tracked the man down the following morning. He is now in a different kind of quarantine as authorities arrested him and charged him with providing false information and failure to comply with their earlier direction to stay at the hotel. If there were one upside to the entire affair, it might be that when the man was tested for the coronavirus, it came back negative, so at least he only has his newfound legal troubles to worry about.