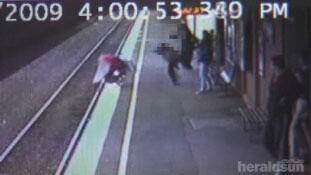 Dramatic security video released on Friday captures the miraculous survival of a six-month-old boy, whose stroller rolled onto the tracks at an Australian railway station and was struck by an oncoming train. The child, who was strapped into the stroller at the time, was dragged beneath the front car for almost 100 feet before the train could be brought to a stop. Remarkably, the boy received only minor injuries, including a bump to the side of his head. Video at the Herald Sun.