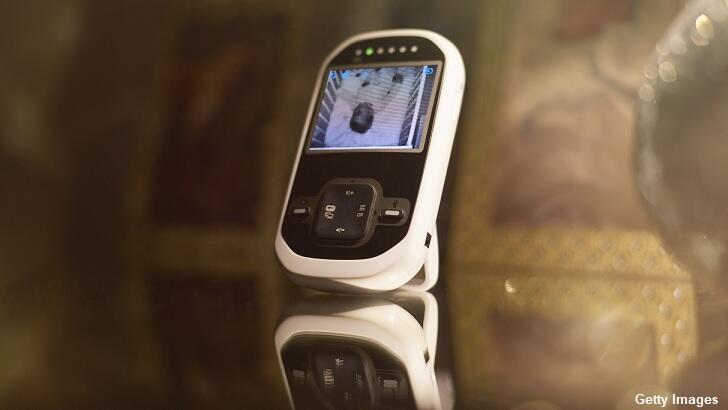 A spooky image circulating online shows an eerie figure lurking over the bed of a child and the youngster's grandmother suspects that it is some kind of sinister entity. The unsettled woman, who prefers to remain anonymous, shared the photograph with a Facebook group devoted to the paranormal last week. According to her, the weirdness began when she noticed that her two-year-old granddaughter was talking to some unseen 'person' on a fairly frequent basis. These puzzling conversations initially sounded innocent until, one night, she heard the little girl telling the 'visitor' to go away. That worrisome moment inspired the grandmother to set up a baby monitor in the girl's room to see what might be behind the strangeness.

As one might imagine, she was deeply unnerved when she later looked at an image captured by the camera and saw what is unquestionably a figure of some kind lingering near her granddaughter's bed. She insists that there was no one in the home who could have been mistaken for the odd interloper in the room at the time and that the photo is not manipulated in any way. The woman went on to note the demonic appearance of the entity, which seems to sport horns and claw-like hands. In addition to this incident, the grandmother claims that there has been a considerable amount of paranormal activity in the home, including cabinets opening on their own and disembodied voices being heard.

The family attempted to cleanse the home by burning "nettle salt and Palo Santo," but this only seemed to agitate whatever was causing all of the commotion in the residence. Although the 'presence' in the residence has left them understandably uneasy, the grandmother believes that it is not necessarily evil and she gets the impression it simply wants their attention. Should that be the case, it most certainly accomplished its goal by way of its chilling appearance on the baby monitor. While the woman's suspicions that there may be a paranormal presence in their home have merit, the family might also want to ensure that all the doors and windows are secure, because the figure seen in the photo very well could be a human intruder with bad intentions.