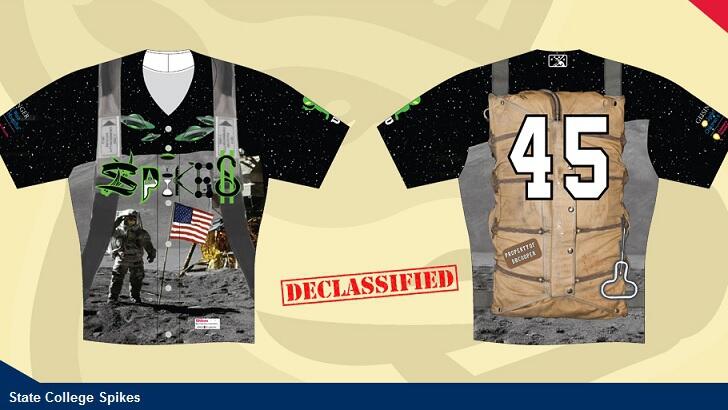 A minor league baseball team in Pennsylvania will be hosting a rather unique event on Wednesday evening when it pays tribute to conspiracy theories.

Organized by the State College Spikes for their game on July 19th, details surrounding the 'Salute to Conspiracy Theories' suggest that the team has done their homework on the topic.

A vast array of festivities are planned for the evening, including the delivery of the first pitch balls to the field by 'D.B. Cooper' as well as the re-christening of a children's play area as 'Area 51 East' for the night.

Showing a remarkable knowledge of some of the more esoteric conspiracies out there, the team will also have 'warnings' about fluoridated water at fountains throughout the park and the on-field host for the event will have a "tracking chip implanted" so that his whereabouts can be monitored throughout the night.

The Spikes players themselves will also be getting in on the fun by sporting some truly awesome conspiracy-themed jerseys emblazoned with images of the moon landing, UFOs, and D.B. Cooper's parachute.

Lest attendees be concerned that the conspiracy celebration is a ruse by the 'powers that be,' the team will also have a station inside the park where people can fashion their own "tin foil hats to guard against mind control."

One would assume there will be no conspiratorial shenanigans during the game itself, but the Spikes' opponents that evening can probably be forgiven should they start feeling paranoid in the event that the umpires make a few questionable calls.

While connecting conspiracies and sports may sound a bit silly to some, there are instances where just such a possibility has been suggested.

Coast Insiders can learn about such infamous incidents by checking out the 1/23/2016 edition of the program featuring sports conspiracy theorist and author Brian Tuohy.