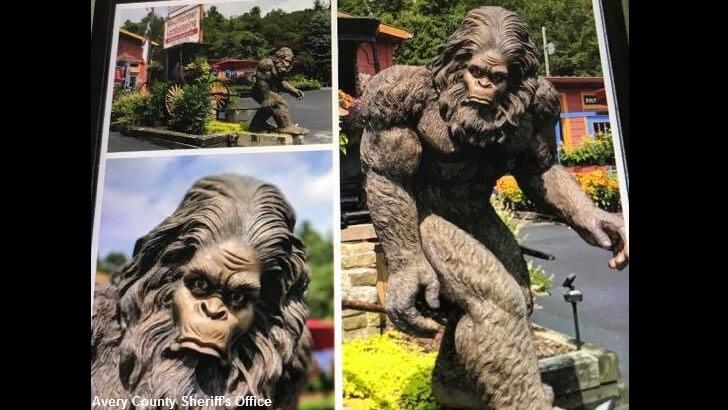 Authorities in North Carolina have become proverbial Bigfoot hunters after someone stole a rather sizeable Sasquatch statue from outside the offices of a landscaping company. In a post on their Facebook page this past Saturday, the Avery County Sheriff's Office asked the public for any information they might have about the six-foot-tall depiction of the cryptid that went missing sometime during the previous night. Based on the size of the statue, which weighs a hefty 180 pounds, it seems likely that the heist was the work of more than one individual.

One of the owners of the landscaping company, Terry Brewer, told the New York Post that they were shocked by the heist as "we've never had any problems before" and had never even considered the possibility that the unsecured statue would be taken. With the school year just getting started at a couple of nearby colleges, she theorized that the Sasquatch may have been stolen as part of a prank by some students and "hopefully they’ll bring it back before they get in trouble."

While the incident may have taken Brewer by surprise, it's actually in keeping with an odd trend we've seen in the last few years wherein similar Sasquatch statues have routinely gone missing. In fact, just a week earlier, a smaller version of the statue was stolen from the yard of a woman in Oklahoma and, amazingly, a garden shop in Ohio has been hit not once, but twice in the last few years by thieves with an apparent appreciation for the famed cryptid. With that in mind, if you're the owner of such a Sasquatch statue, it might be wise to secure the piece to thwart any Bigfoot bandits in your community.