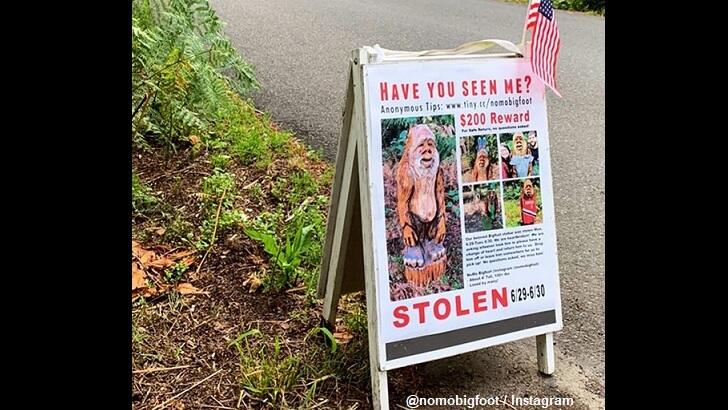 A family in Oregon are the latest victims of proverbial Bigfoot bandits after a beloved Sasquatch statue was snatched from their yard by sticky-fingered ne'er-do-wells last week. According to a local media report, the cryptozoological caper unfolded at some point during the night on June 29th or the early morning of June 30th in the town of Brightwood when miscreants made off with the piece which had been sitting in the yard of the Wille family for the last two years. Dubbed 'NoMo,' the unique looking statue had become something of a fixture in the community by way of its ever-changing seasonal attire that was often showcased on its Instagram account.

Alas, it would seem that NoMo never got the chance to unveil its summer wardrobe thanks to the thoughtless thieves who pilfered the piece which has particular significance to the Willes as they actually incorporated the Sasquatch statue in their pregnancy announcement back in February. Now, much to the couple's chagrin, plans to chart the growth of their baby daughter alongside the four-foot-tall Bigfoot are in doubt with NoMo nowhere to be found.

"He was like a part of our family," lamented Kate Wille, "I wake up every morning thinking he's going to be back." However, that has proven to be wishful thinking so far and, as such, the family are offering a $200 reward for the safe return of NoMo and have set up a website for anonymous tips that may help solve the case. In a post on their Instagram account, the Willes say that they are "choosing to believe there are good people out there and someone will have a change of heart" and bring NoMo back to its home.