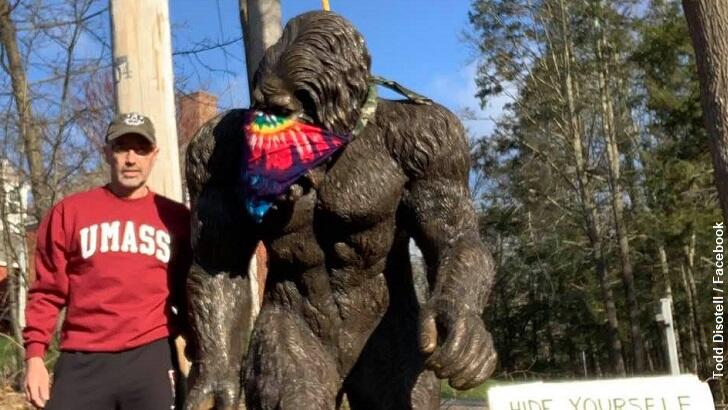 Once again, ne'er-do-wells have stolen a sizeable Sasquatch statue and authorities are on the lookout for the proverbial Bigfoot bandits. This particular incident reportedly occurred in the Massachusetts town of Brimfield this past Wednesday evening. Until that time, the six-foot-tall statue of the famed cryptid had lurked outside the home of UMASS Amherst anthropology professor Todd Disotell, who paranormal TV fans may recognize from appearances on shows like 10 Million Dollar Bigfoot Bounty and Ancient Aliens.

According to Disotell, he'd recently outfitted the faux Bigfoot with a makeshift mask and signage to encourage social distancing. Alas, it would seem that the statue attracted the attention of some miscreants with bad intentions and the Sasquatch wound up being pilfered by a pair of troublemakers this week. Thanks to cameras stationed outside of Disotell's home, the caper was caught on tape, however the sticky-fingered fiends operated under the cloak of darkness and, therefore, discerning their identities is nigh impossible.

Nonetheless, Disotell suspects that the publicity surrounding the theft might cause the criminals to ditch the statue rather than wind up being caught with the hot Bigfoot. "I'm hoping by getting the word out someone says 'Oh, we saw him dumped in a field or in the woods or something,'" he explained, "I don't think whoever took him can possibly sell him because everybody is now looking for him." Local authorities in Brimfield are also on the case and are asking anyone with information concerning the whereabouts of the Sasquatch statue to contact them.

As regular Coast to Coast AM website readers are undoubtedly aware, the stolen Sasquatch from Disotell's yard is the latest in what has become a troubling trend over the last few years. A mattress store in Florida, a landscaping company in North Carolina, and people in Ohio as well as Oklahoma have all fallen victim to similar Bigfoot banditry. With that in mind, we once again advise owners of such statues to secure their Sasquatch.