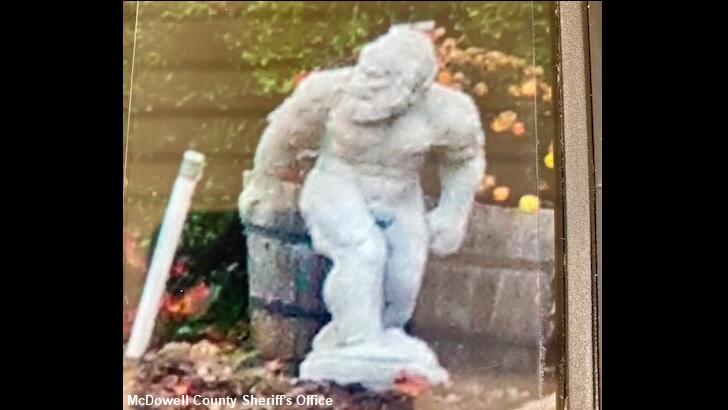 Sticky-fingered ne'er-do-wells in North Carolina stole a Sasquatch statue from outside of a residence and authorities are asking the public for help in tracking down the pilfered piece as well as the Bigfoot bandits responsible for its disappearance. The case reportedly unfolded earlier this month in the community of Marion, where the perpetrators made off with a three-foot-tall statue of the famed cryptid that weighs 150-pounds and had been stationed outside of a home in the town.

The McDowell County Sheriff's Office issued a press release alerting residents to the odd caper and, teasing the possibility of a "cash reward," called for any tips which may lead to the return of the concrete piece. Based on past incidents involving stolen Sasquatch statues, now that the heat has been turned up on the individuals behind the heist, the piece will likely wind up being found in some random location in a few days.

What makes this particular theft of interest is that Bigfoot just so happens to be the "official animal" of the small North Carolina town, which bestowed the unique honor onto the beloved cryptid back in 2018 and hosts an annual festival centered around Sasquatch. Given the community's affinity for the creature, it would not be surprising if the stolen statue is just one of many such pieces to be found throughout the area, making the need to capture the bandits practically paramount, since this could be the start of a full-blown crime spree if they are not brought to justice.