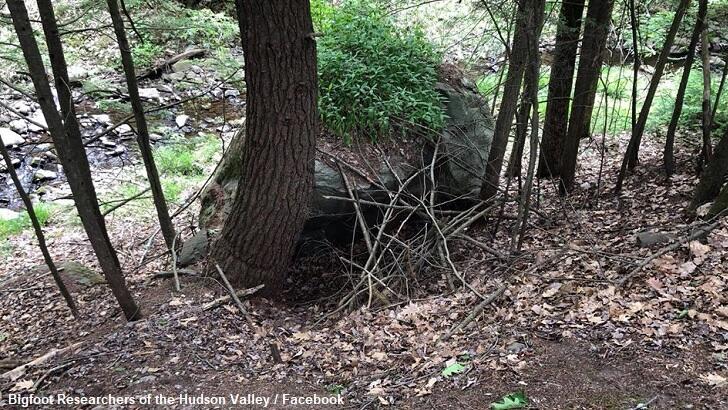 In an intriguing case out of New York's Hudson Valley, some hikers stumbled upon an odd print and a possible pair of dens that some people suspect could be evidence of a Sasquatch in the area. Images of both the potential track and curious structures were shared earlier this month on Facebook by the group Bigfoot Researchers of the Hudson Valley, who explained that the unnamed witnesses spotted the odd scene while exploring a forest in the town of Cairo. Chillingly, the hikers claimed that some unseen beast "grunted" at them as they took the photographs.

The image of the suspected print, which can be seen here, is somewhat difficult to decipher as it appears to have been left behind on some leaf-covered ground and is largely short on details like toe impressions. On the other hand, the photos of the theorized dens are fairly fantastic in that they show what seems to be makeshift shelters constructed out of sticks. The research group indicated that they will be setting up trail cams in the area in the hopes of catching sight of something unusual in the area.

Reaction in the community is largely mixed with one Cairo resident claiming to have recently heard "howling and tree knocking" reminiscent of Bigfoot reports, while others were more skeptical of the situation and suggested that perhaps the print and dens were the work of more prosaic creatures such as raccoons and bears. There were also a few residents who expressed concern about disturbing the animals in the forest, whether they be Bigfoot or something less exciting. What's your take on the images that the group received? Share your thoughts at the Coast to Coast AM Facebook page.