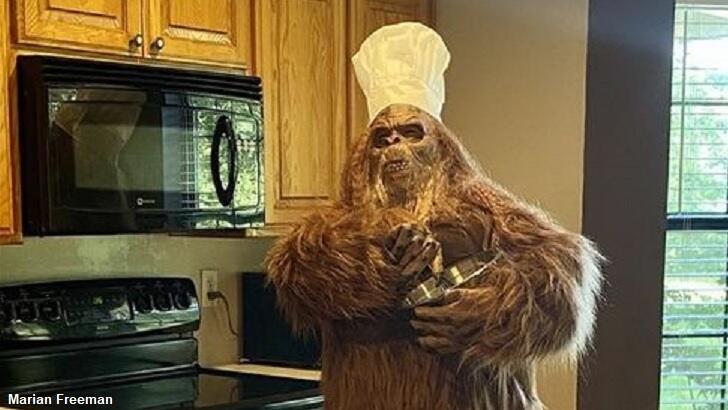 Bigfoot has once again been called into action by a real estate agent hoping to garner some attention for a home that is up for sale. According to a local media report, the iconic cryptid was enlisted by realtor Marian Freeman of East Texas when she and a friend were contemplating how to spark some interest in one of the properties in her portfolio. "We needed some fun in real estate, we needed something to get this house moving," she recalled "and we thought, maybe this would do it."

Inspired by a similar ad that another realtor had created using a person dressed as a dinosaur and musing that the residence seemed "like a home Bigfoot would live around," Freeman proceeded to put her plan into action. She purchased a Sasquatch costume and convinced her friend to wear it for some photographs of the 'creature' enjoying the property. The images were subsequently inserted into the online listing for the home in the community of Gilmer as a veritable Easter egg for prospective homebuyers to discover.

The idea appears to have been a rousing success as she has booked numerous showings of the home since 'Bigfoot' first appeared on the proverbial scene. Freeman is, of course, not the first realtor to generate a buzz by featuring Sasquatch in their listing as the concept has also been used in both California and Ohio in recent years. The trend, such as it is, serves as yet another reminder of how Bigfoot has become a commercial fixture in modern times to the point that the creature really ought to get itself an agent.