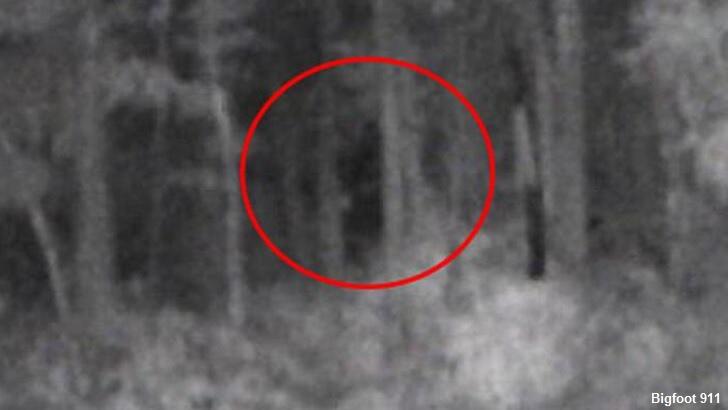 A Bigfoot research group in North Carolina has released a photograph which they say shows the famed cryptid lurking in a forest. The intriguing image was reportedly captured by the organization known as 'Bigfoot 911' this past weekend during an exploratory expedition that culminated with what they describe as a rather chilling encounter with not one, but several of the mysterious creatures. According to group founder John Bruner, he and three companions were "scouting for new locations" to search for Sasquatch around Lake James when suddenly things took a wild turn.

He explained that the group, who had been in a boat on the lake, ventured into a small cove near a patch of forest where area residents had recently reported hearing strange howls. After shutting off their engine, Bruner recalled, they "immediately heard movement on both sides of the cove" followed by a series of "wood knocks." Sensing that something sizeable may be nearby, the group scanned the shoreline with night vision cameras in an attempt to locate what was behind the odd noises. It was then, Bruner said, that "I immediately locked on to this creature," which he believes was Sasquatch, "and watched it for five minutes."

He estimated that the possible Bigfoot was seven-and-a-half feet tall and observed that it appeared to be swaying side to side. Although the group were only about 50 yards away from the creature, Bruner observed that they did not feel particularly threatened by the close encounter since it seemed as if the Sasquatch was at ease because they were in a boat and not in any position to pose any danger to it. Chillingly, he noted that the creature that he was observing was not making the wood knock sounds, leading Bruner to speculate that "at least" three Bigfoot were in the area at the time.

Following the five-minute-long sighting, Bruner said, the creature departed from the area and disappeared back into the wilderness, although the group continued to hear strange sounds coming from the forest for another 45 minutes. Upon their return from the expedition, they posted some of the 121 pictures from the incident to their Facebook page along with an account of their experience. They now hope to return to the area in the not-too-distant future to conduct a more thorough investigation of the location where they think that they saw the Sasquatch.

This encounter over the weekend along with a pair of recent incidents suggest that North Carolina may be something of a Bigfoot hot bed. To that end, this past August, a researcher snapped what he believes is a photo of the creature and, earlier in the summer, a woman was featured on a local newscast claiming to have had several Sasquatch pass through her backyard. Marion, the town in which Bigfoot 911 is based, also made national news last year when it declared Bigfoot to be the 'official animal' of the community.