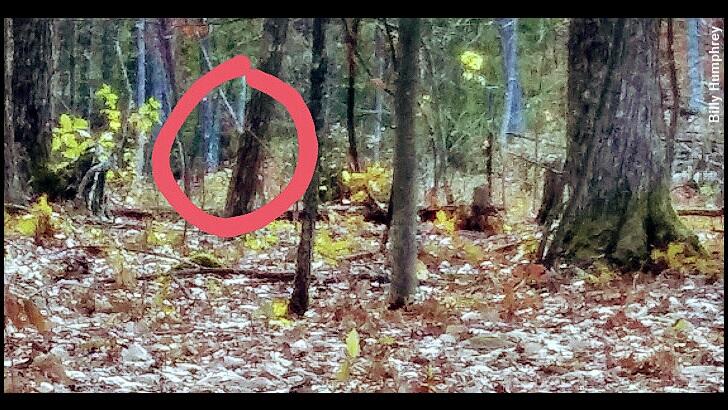 A couple in West Virginia claim to have had a close encounter with a Bigfoot that was lurking in their backyard. According to a recent local media report in which they shared their story publicly for the first time, Bill and Sheena Humphrey's remarkable experience occurred back in October of last yer. It began when Bill set up a deer hunting blind on their property in the remote community of Danese and soon noticed that food that he'd left out to attract the creatures had gone missing rather quickly on consecutive nights.

"Whatever it was, it was eating everything," he recalled, "and I was determined to find out what was going on." As such, Bill decided to spend the night in the deer blind in the hopes of catching a glimpse of whatever had been feasting in the forest near his home. As his proverbial stakeout unfolded, the would-be deer hunter inexplicably grew increasingly uneasy and even texted Sheena to say "something is eerie up here. There ain't nothing moving."

His intuition seemingly proved correct, Bill said, when a sizeable creature made its way toward the blind. Although he could not see the animal at first, he suspected that it was a rather massive bear, since the interloper passed in front of a light that was mounted nine feet above the ground. His curiosity piqued, Bill returned to the spot over the next two evenings and, on that third night, brought Sheena along with him to keep watch.

A mere 15 minutes after they arrived at the spot, Bill was alerted by his wife that there was a visitor alongside them. "We looked out, and Sheena says, calmly, 'There he is,"' he recollected, "I said, 'There who is?' ... 'Bigfoot,' she said." Although the couple only briefly managed to observe the creature, Bill was able to snap one photo of the alleged Bigfoot (seen above) and provided a fairly detailed description of the beast. "The thing was huge," he said, "it had a cone head, and it was tan under the eyes and had a barrel chest."

Bill went on to note that the Bigfoot appeared to be around eight-and-a-half feet tall and closely resembled the purported Sasquatch from the legendary Patterson-Gimlin film. Disturbed by their close encounter with the creature, the couple did not return to the area for a month and, when they did, they found that the deer blind had been destroyed in a manner that the experienced woodsman did not believe resembled how a bear would trash the site looking for food.

Lest one think that Bill's story is the product of wishful thinking from a particularly imaginative Sasquatch enthusiast, he indicated that was far from the case. "I didn't believe in Bigfoot," he revealed, "I one-hundred-percent didn't believe in it, and I said that people who claimed they saw it were crazy." As one has likely surmised, Bill's thoughts on the subject have completely changed. The former skeptic even went so far as to express some chagrin over the turn of events since, in the past, "I've made fun of people" who said that they had seen the creature.