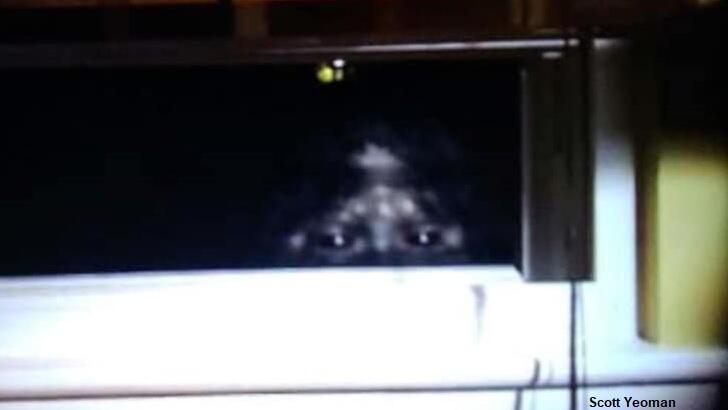 A remarkable series of photographs taken by a man in Colorado may show a Bigfoot peering into a window. The highly intriguing images were captured back in October of 2017 by Scott Yeoman, who shared them with the public for the first time this past weekend on Facebook. According to him, the incident occurred one evening as he and his wife were refurbishing a mobile home on their 11-acre property in the community of Bailey.

Suddenly, the couple were caught off guard by a "very harsh odor" which Yeoman said "smelled like rotting animal flesh, vomit, and excrement." It was then that he noticed "something moving outside the window from the corner of my eye." Since the ledge of the window was approximately seven to eight feet tall, Yeoman initially suspected that the proverbial visitor was a bear trying to look into the mobile home.

However, when he caught sight of the creature's face as it moved closer to the window, Yeoman was struck by how, unlike a bear, its eyes were large and far apart. Upon the realization that the thing outside his window was not a bear, he recalled, "fear struck me hardcore." He then quickly reached for a camera nearby and snapped a series of pictures. Strangely, Yeoman said, the creature closed its eyes when he first pointed the camera at it. The bewildered witness mused that it was akin to a child acting as if "you can't see me if my eyes are closed."

About eight minutes into the encounter, Yeoman wrote, his wife came into the room and he told her what was happening. When she saw the creature, she screamed and ran to a back bedroom in the home. Determined to defend themselves, Yeoman grabbed a gun from a closet. However, the creature was moving away from the window by the time he returned. Since it had not tried to get inside the home, Yeoman opted not to shoot at it and the creature ultimately left the scene in a peaceful fashion.

Unfortunately, this case could have been all the more fantastic as Yeoman said that he actually filmed the creature peering in the window for about 10 minutes. However, a house fire later destroyed the computer that contained the video. According to Yeoman, he occasionally sees signs, such as broken tree limbs and eye shine in the nearby wilderness, that seem to suggest that the creature is still lurking around the property, but the couple have not had any other close encounters.

While it is undoubtedly disappointing that Yeoman's footage is seemingly lost forever, the photos from that evening are unquestionably thought provoking and, if they really do show Sasquatch, may be some of the best photos of the creature ever taken. That said, skeptics will likely say that the 'Bigfoot' is either a bear or the product of a clever hoax involving a gorilla suit. What's your take on Yeoman's photos? Share your thoughts with us at the Coast to Coast AM Facebook page.