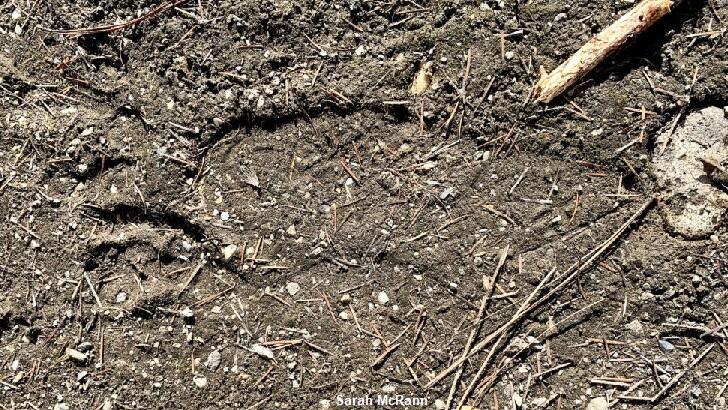 A woman in British Columbia stumbled upon a strange footprint that she believes might have been left behind by Bigfoot. According to a local media report, Sarah McRann spotted the strange impression in some dirt while visiting the Shuswap Falls near the community of Lumby this past weekend. Fortunately, she managed to snap a photo of the odd footprint, but it's difficult to discern exactly how big it was since there is nothing nearby to provide some perspective on size.

Be that as it may, McRann expressed little doubt as to what may have made the impression. "This is not an animal print," she argued, "and I wouldn't say a man print either." To that end, McRann theorized that it had been created by a Bigfoot and noted that she had previously seen the creature two years ago. However, not everyone is convinced that the print was created by the famed cryptid.

Asked to examine the photograph by a local newspaper, wildlife expert Pete Wise expressed skepticism about the proverbial Bigfoot theory. "Hard to tell, but it doesn't look like wildlife," he said, positing that perhaps it was simply a shoe print. That said, Wise was philosophical about the existence of Bigfoot, based on his extensive experience as a search and rescue worker who has spent a whopping seven decades exploring the wilderness. "I'm not saying it's not here," he mused, "I've got buddies who swear they've seen him, but what did you see?"