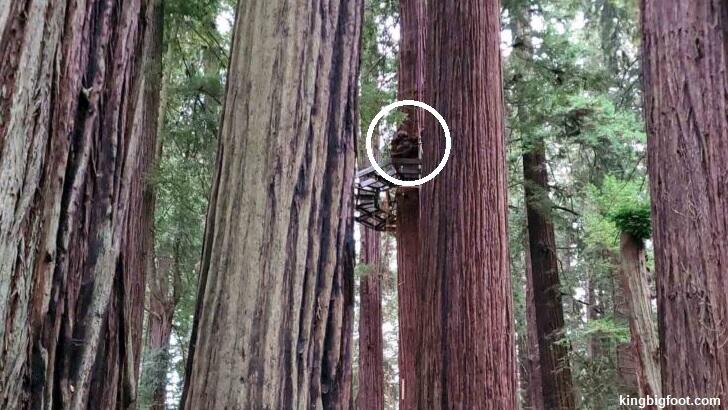 A father and son admiring California's majestic redwood trees caught sight of an odd anomaly that they suspect could have been Bigfoot. The potential sighting reportedly occurred earlier this month as the duo were visiting Sequoia National Park. While looking at site's iconic redwood trees, the man's son looked up at a platform situated approximately 50 feet above the ground and noticed something unusual, declaring "dad, I think I see a Bigfoot."

Although skeptical that his son had really spotted a Sasquatch, the dutiful dad took a pair of photographs of the anomaly atop the platform. Although hard to discern, the puzzling oddity appears to be dark brown, rather sizeable in shape, and possibly humanoid. "I don't know what it is," the man conceded, "but it could conceivably be a Bigfoot." According to the witness, he and his son attempted to get closer a look at the strange sight further down the trail, but when they reached an area with a better vantage point the mysterious shape had vanished.

What makes the sighting particularly intriguing is that the specific location where the anomaly was seen is part of a forthcoming installation known as the Redwood Sky Walk. By virtue of it still being under construction, the platform is not open to the public and would presumably be inaccessible to anyone visiting the park. With that in mind, what's your take on the perplexing shape? Could it have been a Bigfoot exploring the new addition to the forest or is it merely a trick or light and shadow? Share your thoughts with us at the C2C Facebook page.