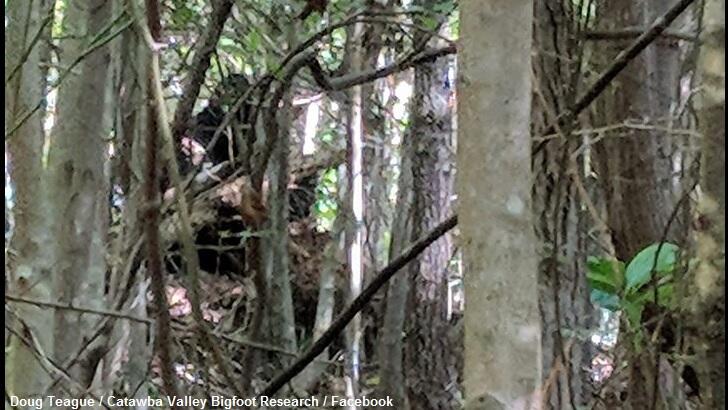 A Bigfoot researcher in North Carolina believes that he stumbled upon the famed cryptid while walking in the woods earlier this month. According to a local media report, Doug Teague was retrieving some trail cameras in a forested area of McDowell County on August 16th when he suddenly heard a mysterious tapping sound coming from somewhere nearby. Although he initially assumed the noise was a woodpecker, his assessment soon changed when something began throwing rocks at him.

Realizing that he may be in the presence of a Sasquatch, Teague looked around and saw a dark form, for lack of a better term, a short distance away from him in the woods. Despite being overcome with excitement over the experience, the researcher smartly took out his cell phone to record the scene and captured a few photos as well as a video of what he contends is a Bigfoot seemingly sitting with its back to him. He also found a number of intriguing prints in the nearby mud.

While some skeptics may say that Teague simply encountered a bear and not a Bigfoot, he dismissed that assertion due to a pair of factors. First, he astutely observed that "bears don't throw rocks." Additionally, Teague explained that his dog, Crazy Daisy, was with him during the possible Sasquatch encounter. "She was going nuts, but staying close to me," he recalled and noted that, had the creature been a bear, his canine companion would have approached the animal.

Looking back on the sighting, which was his fourth such experience over many years of looking for Sasquatch, Teague marveled that "I was like a giddy kid." Although he conceded that some skeptical individuals will doubt his story, the longtime Bigfoot researcher expressed little consternation about such critics. "People don't believe in 'em," he said of the legendary cryptids that have so far managed to avoid being captured or proven to exist, "but they're there."