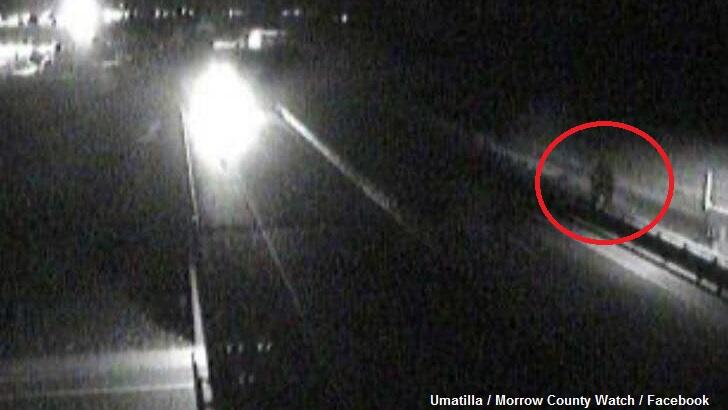 An intriguing traffic camera image from a highway in Oregon may confirm a motorist's contention that they spotted Bigfoot while driving through the area last month. According to a Facebook group that tracks scanner reports in the state, the sighting occurred back on November 30th when an individual made what was described as a "frantic phone call" to the state police and said that they had just seen Sasquatch. The witness claimed that the creature was "dwarfing the guard rail" and "too big to be a bear," while also walking in a bipedal fashion.

What would otherwise be a fairly run-of-the-mill Bigfoot sighting took an interesting turn when the 911 dispatcher turned to an Oregon Department of Transportation website that just so happened to have a camera placed at the area where the creature was purportedly seen. Remarkably, the system had an image from around the time of the incident and, in the photo, what appears to be a large, bipedal creature can be seen standing alongside a guardrail.

Unfortunately, the photo is like most purported pictures of Sasquatch: rather blurry and undoubtedly hard to decipher. Be that as it may, the fact that the camera caught something anomalous at the same time as the motorist says that they saw a Bigfoot along the highway is pretty noteworthy and, at the very least, suggests that the driver didn't concoct the story out of whole cloth. With that in mind, what's your take on the image? Share your thoughts with us at the Coast to Coast AM Facebook page.