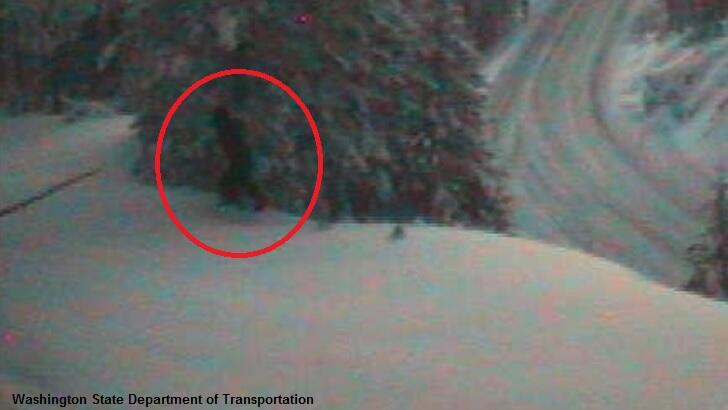 A weird set of photos shared by the Washington State Department of Transportation seemingly shows some kind of large, bipedal creature lurking on a snow-covered mountain, but not everyone is convinced that it's a genuine Bigfoot. The three odd images were posted to Twitter on Wednesday afternoon by the department on Wednesday afternoon with the caption "Sasquatch spotted!" According to them, the pictures were from webcam placed along a highway at a location known as Sherman Pass.

"If you look closely by the tree on the left," the WSDOT wrote, "there looks to be something ... might be Sasquatch." For one of the photos, the department 'helpfully' circled the suspected creature which, otherwise, would resemble little more than a blur. However, the other images, one of which we've highlighted above, appear to show the distinct outline of someone or something moving on two feet. The department stopped short of outright declaring that the pictures showed a genuine Bigfoot, instead simply saying "we will leave that up to you!"

To that end, one would be wise to proceed with caution when it comes to believing that the photos show Bigfoot. That's because, at the risk of looking too deeply into what was likely just a clever joke, it would appear that the 'creature' in question is stuck in the same position in all of the photos, meaning that it is either some kind of stationary object or an unfortunate Sasquatch that has been frozen in place. As such, numerous observers have argued that the perceived cryptid is, in fact, probably just a trick of light and shadow.