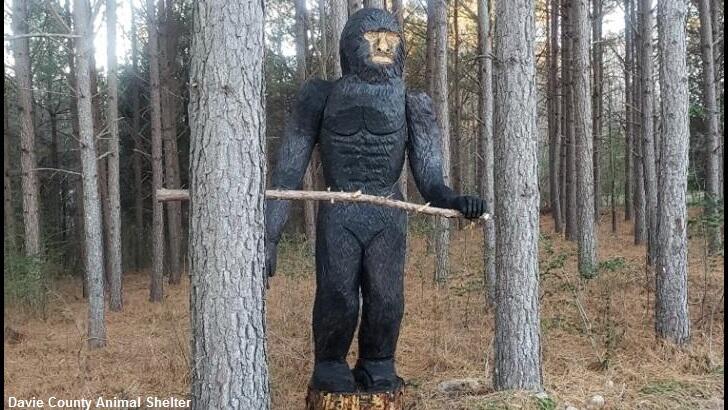 A series of breathless Bigfoot reports in a North Carolina town led to authorities issuing a statement assuring residents that the legendary creature was not lurking on the outskirts of their community and that they were, in fact, seeing a statue. According to a local media report, the explanation was posted by the Davie County Animal Shelter on their Facebook page earlier today along with a photo of the 'beast,' which is appropriately located in the town of Mocksville.

The confusion surrounding the 'cryptid' was caused by drivers passing by the creation at night and, in turn, having their headlights illuminate a pair of red marbles which serve as 'eyes' on the eight-foot-tall Sasquatch statue. The effect resulted in a number of motorists suspecting that they had just encountered some kind of massive creature with glowing eyes and several of them alerted police to the high strangeness.

Eventually, the number of reports to animal control officers reached a point where they were more of a nuisance than an amusement and they felt compelled to assuage residents about the odd situation on social media. "If you see this phenomenon," the Facebook post said of the statue with the glowing eyes, "you do not need to call animal control to report seeing Bigfoot, Sasquatch or any other large creature."

When incredulous readers wondered if people were really phoning in such reports, the administrators of the group assured them that not only was this the case, but that the animal control office was "tired of answering calls" about the statue. While we can understand their frustration, let's hope that nobody in the area actually encounters Sasquatch anytime soon, since their sighting probably won't be taken very seriously.