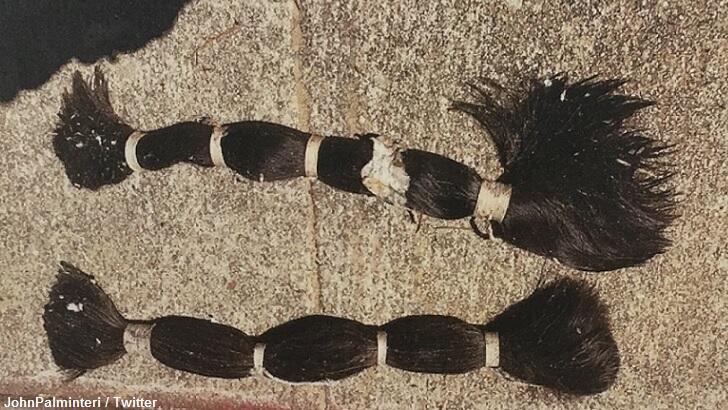 Residents of a neighborhood in Santa Barbara, California have a bizarre mystery on their hands following the discovery of numerous weird hair bundles found inexplicably sitting in the middle of several different roads. According to a local TV station, the oddities first began appearing early last week and look to be lengthy clumps of hair tied together with tape or elastics. Although the exact number of bundles discovered so far is uncertain, they are apparently so plentiful that the reporter covering the confounding case easily managed to acquire a handful of them for his story.

Speculation as to the nature of the hair contained in the bundles has generally fallen into two camps: human or horse. However, residents presented with the pieces were largely flummoxed by the oddities and couldn't quite decide on what their origin might have been. One adventurous young man even went so far as to smell the hair, but his ill-advised investigatory technique yielded no answers. The one thing that they did agree on is that the bundles are kind of creepy, especially since they have been popping up all over the place.

One theory offered by observers is that perhaps the hair was meant to be donated to a charity, but somehow got lost along the way. Another possibility is that there is some kind of cultural significance to the bundles, although that hypothesis is hard to reconcile with the fact that they seem to have been haphazardly discarded, which runs counter to the idea that they would have an intrinsic value. What's your best guess for the solution to this head-scratcher of a mystery? Let us know at the Coast to Coast AM Facebook page.