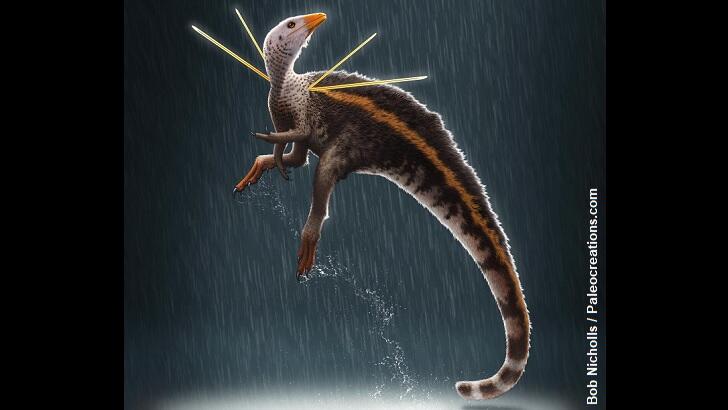 A newly discovered dinosaur species sported a bizarre set of appendages which scientists say are unlike anything they've seen before in the fossil record. Dubbed Ubirajara jubatus, the Cretaceous period creature reportedly roamed what is now the northwestern region of Brazil approximately 110 million years ago. About the size of a chicken, what sets the dinosaur apart are what researchers describe as "two very long, probably stiff ribbons on either side of its shoulders."

Similar to fingernails or hair, these appendages were likely comprised of the protein keratin, paleontologists say, and were probably used to scare off predators or attract a mate. In the case of the latter scenario, scientists likened the dinosaur to modern-day birds such as peacocks which famously boast vivid plumage. "Ubirajara shows us that this tendency to show off is not a uniquely avian characteristic," observed Robert Smyth, "but something that birds inherited from their dinosaur ancestors."

In addition to the wholly unique ribbons, the odd dinosaur also possessed a long furry mane that ran down its back and could be 'activated' in a manner akin to a porcupine's quills. Although they cannot be certain, the scientists who discovered the creature theorize that it was likely quite colorful. And, making it all the more tragic that the very strange dinosaur is extinct, research team member David Martill postulated that "given its flamboyance, we can imagine that the dinosaur may have indulged in elaborate dancing to show off its display structure."