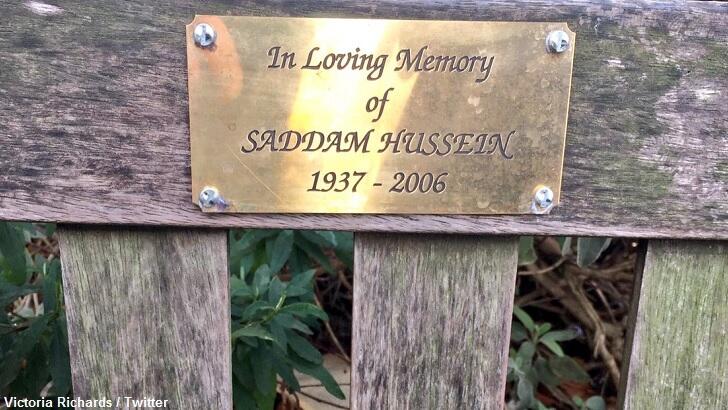 Residents of a suburban area of London were left scratching their heads after a plaque memorializing Iraqi dictator Saddam Hussein appeared on a bench overnight. The bizarre bronze plate, which was first spotted this morning by a bewildered resident of Wanstead, bears the words 'In loving memory of,' followed by the infamous depot's name as well as the dates of his birth and death.

Although the chilling 'tribute' was largely dismissed as a tasteless prank, most people living in the area didn't find it particularly amusing. "I was horrified," one woman declared to the newspaper The Independent, "I think someone celebrating the life of a man who’s caused such terror is outrageous." Another member of the community expressed concerns that the person who placed the plaque on the bench could be a Hussein sympathizer, theorizing that "left-wing trouble makers" may have been behind the stunt.

At least one resident had a more down-to-Earth perspective on the furor surrounding the stunt, musing that "people being outraged are just playing into the prankster's hands. They should just take it off and forget about it." It would appear that is exactly what was done as workers reportedly removed the plaque shortly after it was discovered. Incredibly, this was not without a bit of controversy as there were apparently some people who actually suspected that the plaque was celebrating a different Saddam Hussein who just so happened to have been born and died on the same dates as the dictator.

So this has just appeared on a bench on my local high street pic.twitter.com/Je9lvNsZX8