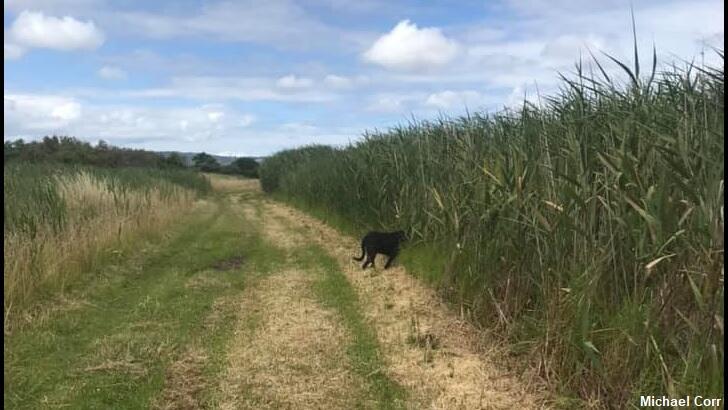 A father and son out for a walk in an Australia swamp snapped a photograph of what they believe may be a black panther. The intriguing picture was reportedly taken by Michael Corr as he and his son were visiting the Tootgarook wetlands last week. Much to their considerable consternation, their exploration of the area came to a sudden stop when they caught sight of a sizeable creature in front of them. "I just thought that's the biggest cat I've ever seen," Corr recalled, "and it was just crossing the tracks as if it was stalking something."

In a testament to how off-putting the sighting was, the dad says that his 11-year-old son took off running in the opposite direction out of big cat. To his credit, Corr managed to snap a picture of the creature will his cell phone before it vanished into the tall grass. He subsequently shared the photo on a Facebook group devoted to such sightings in Australia, where it was met with both excitement and some skepticism as some argued that the animal may have actually been a dog.

For his part, Corr insists that the creature had the head of a cat and its movements resembled those of a feline. Conceding that the animal may have simply been a large feral cat, the bewildered witness noted that "there are stories that go way back about panthers in the wild in Australia left from the traveling circus and also from World War Two." With that in mind, what's your take on the weird photo? Is it elusive evidence of big cats roaming the region or merely a trick of perspective making a terror out of a tabby? Share your thoughts at the C2C Facebook page.

The Experiencer Group is a new social media platform that provides a gathering place for those who’ve undergone abduction, contact with non-human entities, ghosts, precognition, NDEs, and much more. The site was created by Stuart Davis -...