Home > Articles > Body of Missing Man Discovered Inside Stegosaurus Statue in Spain
May 25, 2021 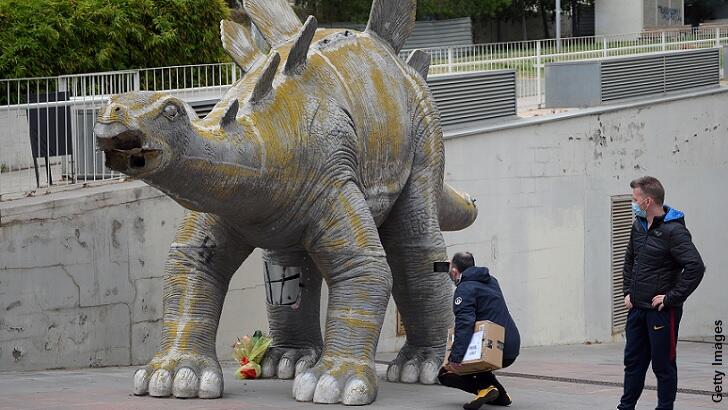 Body of Missing Man Discovered Inside Stegosaurus Statue in Spain

An unfortunate man in Spain perished after he climbed into a stegosaurus statue to retrieve his lost cell phone and wound up stuck inside the piece. The unsettling turn of events reportedly came to light over the weekend when a father and son were playing near a sizeable papier-mache dinosaur (seen above) that sits outside a disused cinema in the municipality of Santa Coloma de Gramenet. What ought to have been a fun outing took a dark turn when the pair spotted something odd inside the statue and promptly phoned the police. When officers arrived on the scene, they quickly determined that the out-of-place object was, in fact, a dead body.

Explaining the gruesome situation, cops say that the remains were located in one of the faux dinosaur's legs and that it appeared as if the man, who had been reported missing by his family earlier in the day, had somehow lost his cell phone inside the piece and had been attempting to retrieve it. The unnamed individual's predicament sounded particularly nightmarish as, authorities noted, "it looks like he entered the statue head first and couldn't get out." Chillingly, cops indicated that the man was probably stuck inside the stegosaurus for a couple of days, leaving one to surmise that his final moments were both terrifying and likely quite maddening since he clearly could not reach his cell phone to call for help.