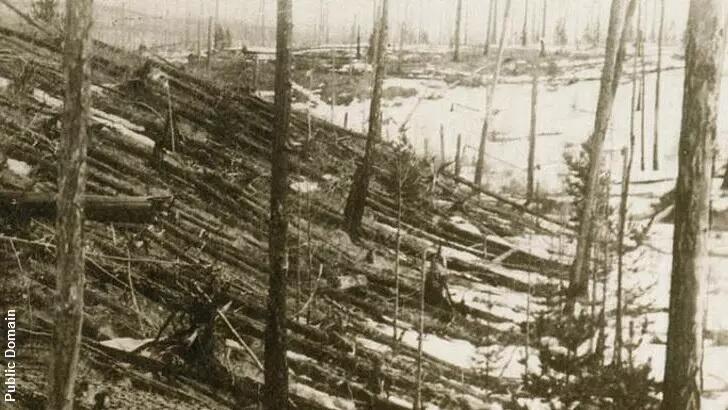 An intriguing new theory has been offered for what caused the legendary 1908 Tunguska event. Scientists studying the strange incident, in which a mysterious blast of some kind flattened a whopping 80 million trees over an area of 830 square miles in Siberia, have long suspected that it was caused by a meteor striking the Earth. However, a recently published paper reportedly calls that hypothesis into question and, instead, put forward a rather fantastic alternative explanation.

Siberian scientists studying the case argue that the Tunguska event was actually the result of a sizeable iron asteroid entering the Earth's atmosphere, skimming the planet, and then shooting back out into space. The bold idea was based on mathematical models which explored different scenarios wherein asteroids of varying size, composition, and trajectory interacted with the Earth. Through this process, researchers were able to rule out an icy ball and a rocky object as the culprits for the blast and, in turn, determined that it was most likely an iron asteroid.

The model which best matched what occurred in 1908 indicated that the iron interloper was approximately 320 to 650 feet in diameter and zipped across 1,800 miles of the Earth's atmosphere before exiting back into space. This brief moment, researchers say, would generate the force seen on the ground in Tunguska and explain why there is no crater that can be connected with the event. The scientists behind the paper also noted that the theory accounts for "optical effects associated with a strong dustiness of high layers of the atmosphere over Europe, which caused a bright glow of the night sky."