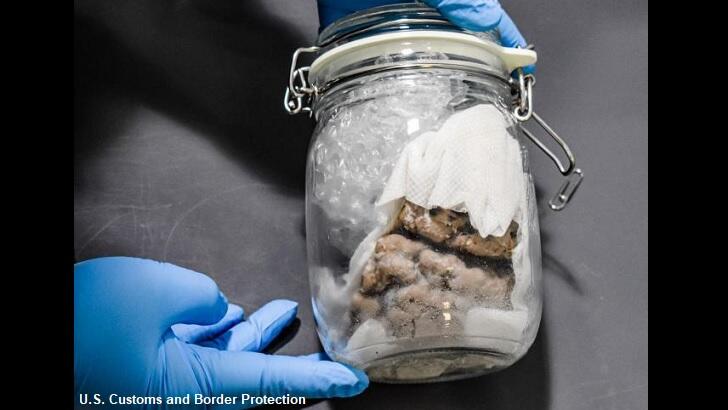 What was thought to be a routine security check of a Canadian mail truck entering the United States turned out to be anything but that as officers discovered a package that contained a human brain! According to a press release from U.S. Customs and Border Protection (CBP), the creepy find was made last Friday in Port Huron, Michigan at the Blue Water Bridge, which connects the United States and Canada.

Among the many vehicles crossing the bridge into America that day was a mail truck that wound up being picked for a random inspection. When officials looked through the contents of the truck, a curious package labeled 'Antique Teaching Specimen' caught their attention. Upon opening the parcel, they found a glass jar containing a human brain that appears to have been rather inexpertly wrapped in a paper towel and kept safe with some bubble wrap.

While the organ was quite clearly visible through the glass jar, the CBP noted that "any paperwork or documentation in support of its lawful entry into the United States" was nowhere to be found. The case has since been turned over to the Center for Disease Control in accordance with import regulations concerning "biological agents." It is uncertain what will become of the brain next, but we're guessing that the individual who ordered it from Canada probably won't be getting their hands on the specimen anytime soon.