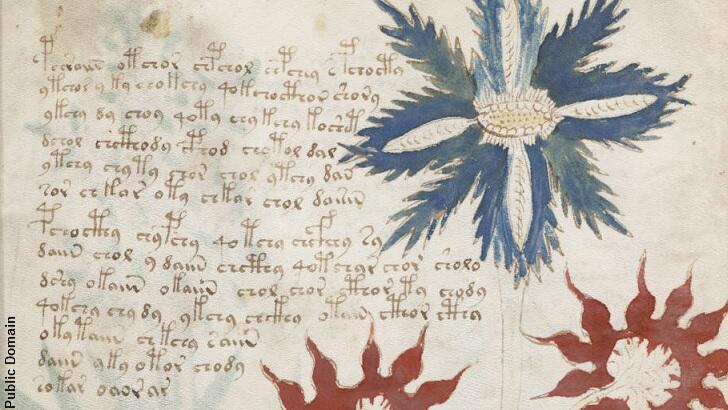 A linguist at a university in England believes that he has deciphered the mysterious Voynich Manuscript. The infamous, centuries-old book containing seemingly coded text has been a source of frustration for scholars since it first came to the attention of the public in the early 1900s. Since that time countless code breakers, academics, and armchair researchers have tried their hand at determining precisely what the manuscript says, but no one has yet to definitively come up with a solution.

Dr. Gerard Cheshire of the University of Bristol is the latest individual to step forward with the rather bold claim of having cracked the Voynich Manuscript after working on the project for just two weeks. In a newly-published paper, the research assistant contends that he accomplished this feat using "some ingenuity and lateral thinking." To that end, Cheshire reportedly marveled that "I experienced a series of 'eureka' moments whilst deciphering the code, followed by a sense of disbelief and excitement when I realized the magnitude of the achievement."

As to the text specifically, Cheshire argues that it is comprised of an extinct 'proto-Romance' language that, he theorizes, was used after the fall of Rome, but subsequently died out since it was largely spoken rather than written. The contents of the Voynich Manuscript, he says, consist of a veritable hodgepodge of insights from the era in which it was written with segments devoted to "herbal remedies, therapeutic bathing, and astrological readings concerning matters of the female mind," among other esoteric offerings.

Clearly confident in his hypothesis, Cheshire declared that it is "no exaggeration to say this work represents one of the most important developments to date in Romance linguistics." However, not everyone is on board with his findings as one expert on Medieval history, Lisa Fagin Davis, dismissed the paper's argument by noting that "'proto-Romance language" is not a thing. She also lambasted Cheshire's conclusions as "aspirational, circular, self-fulfilling nonsense."

For his part, Cheshire hopes to receive funding to put his theory to the test and translate the entire text of the book beyond the snippets that he believes he has already deciphered. Considering that recent history is littered with people who declared that they had decoded parts of the notorious text using all manner of methodologies, yet no one has been officially credited with finally solving the riddle of the Voynich Manuscript, one can't help but cynically assume that Cheshire's claim will also fail to ultimately close the book on the case.