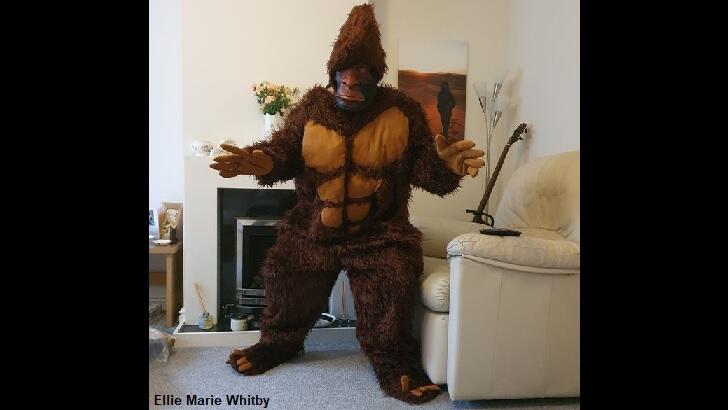 A clever teenage girl in England has taken credit for a fake Bigfoot video that was apparently so convincing that some people were certain that she had captured Sasquatch on film. According to a local media report, Ellie Marie Whitby conceived of the prank as a means of alleviating her boredom while on lockdown due to the coronavirus pandemic. Ordering a Bigfoot costume online and persuading her mother to play the role of the famed cryptid (seen above), the teenager filmed a series of 'sightings' in forested areas around her hometown of Runcorn.

"I'm still not 100% sure how I managed to convince my mum to dress up as Bigfoot and chase me around the woods," Whitby laughed, "but she's quite crazy, like me." After producing the footage, the teen proceeded to upload it to a number of Sasquatch-related Facebook groups both in the United States and in England. The feedback, she said, was overwhelmingly positive. To that end, Whitby recalled that "my favorite response was from one guy who said, 'Ellie, I can with 100% certainty say that is a forest being.'"

Unfortunately for that true believer, their assessment of the footage proved to be incorrect now that Whitby has come forward to put an end to the hoax. While some Sasquatch enthusiasts may not find much humor in her mischievous filmmaking, any seasoned parent can attest that there's a lot worse trouble a teenager can get into nowadays than creating a fake Bigfoot video and so her creativity should be commended, especially since she has since fessed up to the prank.