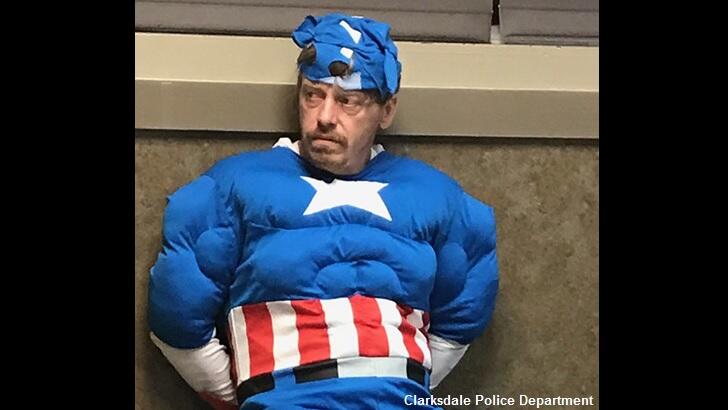 This past year had more than it's fair share of strange incidents, nefarious ne'er-do-wells, and foolhardy misadventures that ultimately required the attention law enforcement. With that in mind, here is the 2019 installment of C2C's proverbial police log that we've come to call the Bizarre Blotter:

Assault: Fight about conspiracy theories leads to an ear-biting brawl, an argument between friends culminates with an arrow being shot into a man's cell phone, and separate stabbing incidents blamed on fear of zombies and aliens, respectively.

Breaking & Entering: A mysterious house cleaner in Massachusetts, 'Captain America' (seen above) in Mississippi, and a group of overenthusiastic ghost hunters in England.

Death Threat: Dispute over a Flat Earth bet devolves into a dire warning.

Ghost Hoax: Teens busted for faking a phantasm to scare drivers in Indonesia and India.

Stolen Items: A $182,000 painting taken in broad daylight by a brazen thief in Russia, 159 bicycle seats stolen by one man in Tokyo, 50,000 apples from an orchard in Indiana, a one-ton boulder from an Arizona national forest (later returned), and Bigfoot statues in North Carolina and Florida.

Vandalism: An ancient stone circle in Scotland tagged with graffiti, federal land in Arizona defaced with 'Research Flat Earth' messages, an Alabama farmer's field destroyed by 'crop circle makers,' and America's Stonehenge struck by a strange miscreant who left behind an unsettling altar.

Chris Bartel discussed his work at and photography of Skinwalker Ranch along with art gallery curator Taras W. Matla. Bob Gebelein presented his issues with mainstream science regarding subjects like reincarnation.