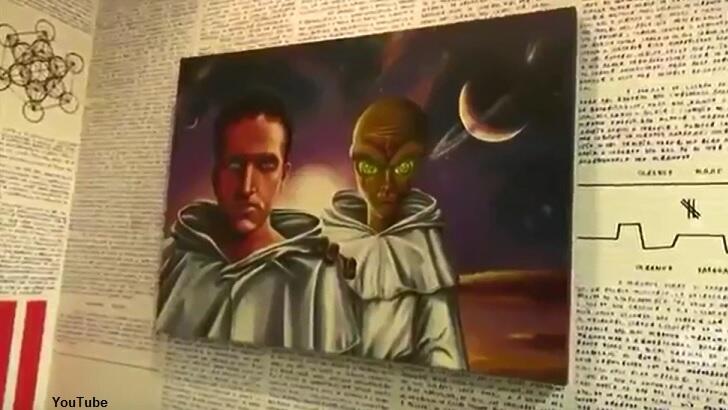 Over the course of the past year, a handful of stories seemed to keep popping up and evolving throughout 2017 to the point that they became veritable soap operas of strangeness with twists, turns, and escalations that kept us on the edge of our seat.

Perhaps the most fascinating such saga of 2017 was that of Bruno Borges, an occult-obsessed student in Brazil, who seemingly vanished in April. His story spawned worldwide headlines due to the young man's bizarre bedroom which was covered in esoteric writing from floor to ceiling and contained a series of coded books.

In the initial weeks after Borges' disappearance, strange new details would emerge about his life prior to going missing and various theories were offered as to what became of him. A couple of months later, in June, authorities announced that they had concluded that his disappearance was an elaborate hoax

Despite that determination, the young man remained missing for most of the summer, 'earning' best-seller status for his first now-decoded book along the way, until he returned to his home in mid-August. A televised interview with Borges in Brazil provided little in the way of insight into how and why he vanished, but did seem to finally put an end to his odd tale.

At around the same time that Borges had gone 'off the grid,' another weird series of stories had started to unfold in a different part of the world as, in early July, villages in India became fixated by fears of a hair-cutting ghost lurking in their communities.

By the end of the month, a stunning 23 incidents of hair-cutting ghost encounters had been reported to police, indicating that it had turned into a full-fledged panic. In early August, it became deadly when a mob of people attacked and killed a woman suspected of being behind the hair-cutting hysteria. And in early November, the furor spread to the country's volatile Kashmir region, where various groups argued that the hair-cutting ghost was some kind of conspiracy.

A similar outbreak also befell the country of Malawi in September when a pair of villages were gripped by a panic surrounding mysterious 'blood-sucking entities' that preyed on unsuspecting people while they slept at night.

As happened in India, the widespread fears in Malawi led to vigilante justice aimed at the perceived vampires in their midst with three people being killed in the chaos. The situation only seemed to escalate from there to the point that the United Nations actually removed staff members from the region in early October and health workers lamented that they, too, were being targeted because of the madness sweeping through Malawi.

For now, it appears that the pair of panics have subsided for the most part, although one should not be too surprised if they emerge again in 2018 akin to how the notorious creepy clown panic of 2016 seemed to stretch into this year. It's also a safe bet that there will be yet another hysteria that hits some other part of the world next year, although it's hard to fathom what form it may take.

Another multilayered story from 2017 revolved around the infamous Flat Earth theory, specifically signs exhorting people to examine the controversial concept. What started with a billboard in Philadelphia in early June grew to include a similar piece of signage purchased in Oklahoma City later that month. Flat Earth graffiti was then spotted in Scotland the next month, much to one politician's chagrin, and a poster endorsing the conspiracy theory was also seen along a beach in New Zealand in September.

And, ironically, our final series of ongoing stories from 2017 concerned the End Times and claims that Planet X would arrive this year and wipe out all of humanity. Dire apocalyptic warnings began back in January, increased around the total solar eclipse in August, and reached a fever pitch the next month when media around the world picked up on the purported doomsday date of September 23rd.

Although we managed to survive that particular moment, it did little to stop further proclamations that the literal end is near, which, if history is any indication, are almost certainly going to occur again in 2018 and, for that matter, probably every year until the apocalypse really does happen.