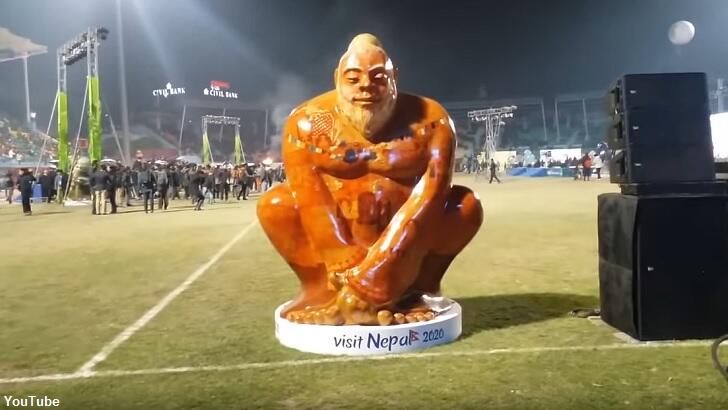 Nepalese residents are crying foul over a new tourism campaign which features what they say is a wildly inaccurate depiction of the Yeti. The year-long 'Visit Nepal' promotion reportedly kicked off this week with the unveiling of a series of colorfully painted statues of the famed cryptid said to lurk in the Himalayas. However, when the public got their first look at the enormous sculptures, which measure seven feet tall and will be displayed at tourist attractions throughout the country, many onlookers were dismayed with its cartoonish appearance.

"This is not right. The government can't just do as it wants," lamented one resident, "if you did not tell me, I would not have known that it was a yeti." The criticism was echoed by Nepalese geographer Ram Kumar Pandey, who has written a number of books of the cryptid which has become something of a cultural icon in the country. "In folk tales, the yeti has been described as a big monkey-like creature," he explained, "however, the recent logo depicts it as a sumo wrestler."

In response to the furor surrounding the statues, which cost approximately $4,500 each, one of the administrators behind the project argued that "our aim is to produce the yeti as an emblem of peace, reconciliation and humility rather than a fear-creating feature." Meanwhile, the artist who created the design explained that he did not consult any books about the creature for insight into its appearance and, instead, relied on "stories that I heard in my childhood."