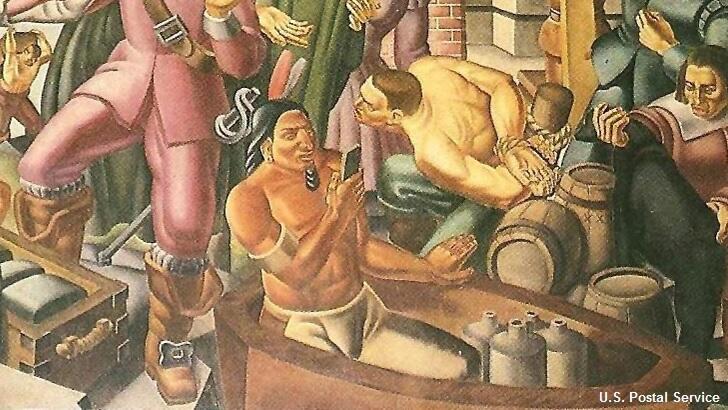 A painting from the 1930's is raising eyebrows because it seems to show a Native American gazing at a cell phone.

The piece, entitled 'Mr. Pynchon and the Settling of Springfield', depicts a meeting between English settlers and Native Americans in Massachusetts during the 17th century.

Amidst the rather chaotic scene showcased in the painting is one moment which looks eerily familiar to modern observers: a Native American sitting in a canoe looking intently at a small black rectangle held in his hands.

Of course, since it would be another seven decades before the first cell phone was invented, the uncanny appearance of such a device in the painting has led to speculation surrounding time travel.

However, art historians have offered their own suggestions for what the enigmatic object might be, including a mirror, a Bible, and an iron blade.

While the possibility that it is, indeed, a cell phone is rather fantastic, such a scenario would require a rather complex explanation worthy of a time travel film.

Since the image is a painting rather than a photograph, artist Umberto Romano would have to have known that Native American possessed cell phone technology and then hidden this information in the artwork.

Were that the case, it would mean that this secret knowledge was passed down centuries after America was settled, somehow been revealed to Romano, and yet still remain a secret today.

As such, it's likely that the prosaic explanations presented by academics is the likely solution to what the mysterious 'device' could be.

Let us know what you think of the odd object found in the painting at the Coast to Coast AM Facebook page.