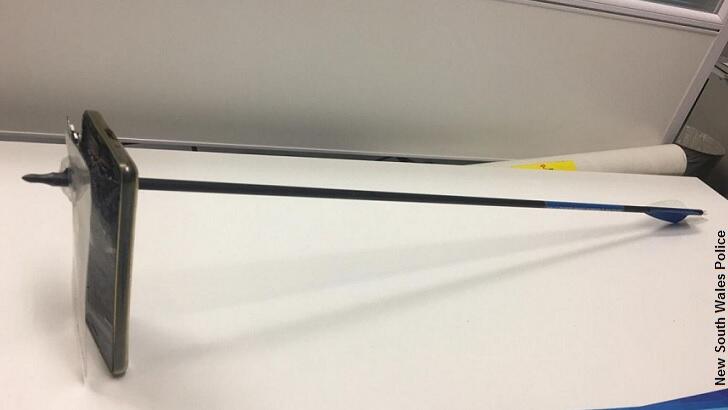 An Australian man narrowly escaped serious injury and possibly even death when his cell phone stopped an arrow that was shot at him by an attacker. The bizarre incident reportedly took place in the village of Nimbin yesterday when an unnamed individual arrived home and saw an acquaintance waiting for him in his driveway. Alas, it would appear that this was not a friendly visit as the interloper wielded a bow and arrow.

When the curious homeowner got out of his car, he quickly pulled out his cell phone to photograph the armed man on his property. It was then that the archer got aggressive and fired an arrow directly at the stunned onlooker. Fortunately, in an incredible bit of luck, the projectile wound up piercing the man's cell phone, stopping short of hitting his body, and only leaving a scratch on his face when the device went flying from the collision.

Authorities did not explain exactly what happened next, but somehow the homeowner managed to evade any further attack and called the police. Officers promptly arrived on the scene and arrested the troubling trespasser and charged him with a number of crimes related to the weird act of aggression.