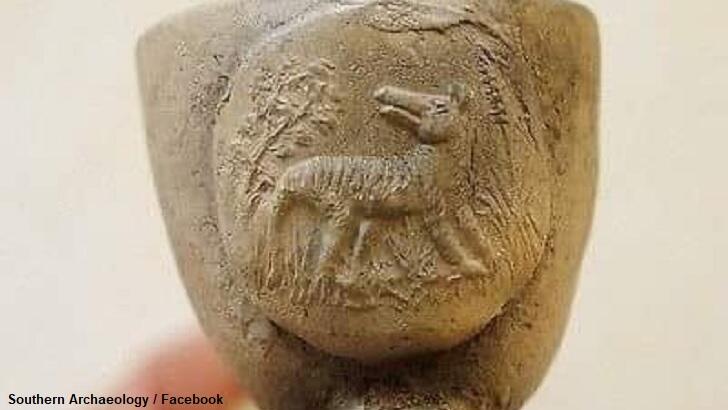 Archaeologists are celebrating the discovery of a centuries-old clay pipe that features one of the oldest European depictions of the Tasmanian Tiger ever seen. The remarkable object was reportedly first found a few years ago when an individual digging for antique bottles unearthed the piece at the bottom of pit which once served as a dump in the 1830s. It was subsequently sold at auction for an undisclosed price to a collector of thylacine memorabilia, who brought it to the attention of amazed researchers.

In a testament to the significance of the object, which is believed to be at least 190 years old, archaeologist Darren Watton marveled to a Tasmanian radio show that "it's hard to contain myself as to how exciting it is." Unlike similar pipes from the era in which it was believed to have originated, the piece is hand-crafted in the area rather than mass-produced in Europe. According to Watton, the depiction of the now-extinct Tasmanian Tiger on the pipe is particularly intriguing to researchers.

That's because, he explained, the artwork "does not appear to relate to any 19th century image that could have been used to assist in the modelling." As such, the drawing on the piece is thought to be original and, therefore, constitutes "one of the earliest depictions of a thylacine we have on record." Interestingly, the pipe also sports a picture of another creature which has sparked something of a debate among experts.

Alongside the Tasmanian Tiger on the piece is a proverbial 'mystery bird' which archaeologists have yet to identify. Some researchers believe that it is a kookaburra, but the animal had yet to arrive on the island when the pipe was created, suggesting that the artist had some knowledge of mainland wildlife. However, other experts argue that the creature is probably a Tasmanian kingfisher, since such a bird would have been in the region where the pipe was found when it was made.