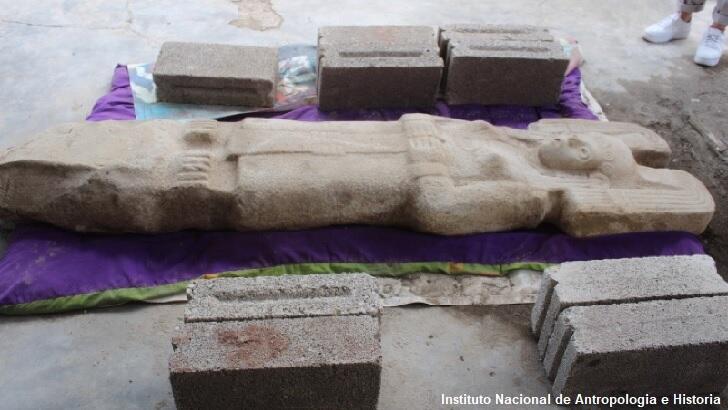 Farmers working in a Mexican orchard were stunned to discover a rather sizeable sculpture of what experts say was likely a powerful female figure from centuries ago. The remarkable find was reportedly made on New Year's Day in the community of Hidalgo Amajac. Officials with the country's Institute of Anthropology and History were subsequently made aware of the surprising discovery and dispatched a team of experts to examine the odd piece.

It was determined that the limestone sculpture, which measures approximately six-and-a-half feet tall, appears to date back to the late Mesoamerican Postclassic period of around 500 years ago. Archaeologists say that the woman depicted in the piece was likely of the ruling class in light of the elaborate headdress she can be seen wearing. The sculpture itself also sported a spiked bottom, which indicates that it was meant to be displayed standing upright with its base stuck into the ground.

The intriguing statue may lead to further insights as experts enlisted to look at the puzzling piece discovered that it actually sat within "a hitherto unknown, but extensive archaeological site." As such, researchers hope to revisit the location in search of additional historical artifacts as well as continue studying the mysterious sculpture. The latter task, however, may take some time to accomplish as the farmers who found the piece have so far opted to hold onto it for themselves pending negotiations with officials regarding where it will ultimately reside.