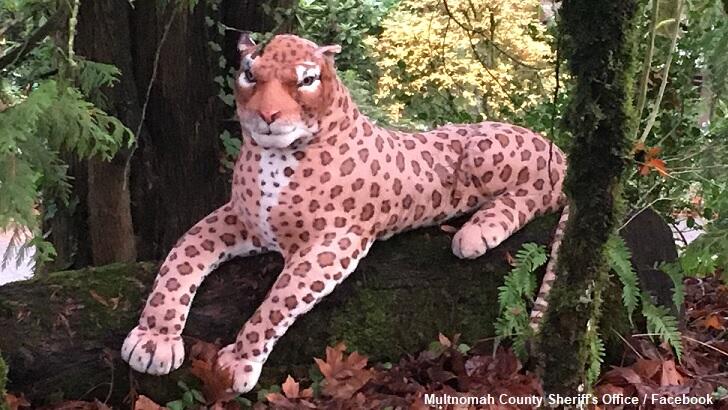 A police officer in Oregon thought he was responding to a call about a potentially dangerous big cat that had wandered perilously close to civilization until he realized the 'ferocious feline' was actually a clever prank. The amusing incident reportedly occurred in the city of Portland last Friday morning when a concerned citizen phoned the Multnomah County Sheriff's Office to report what was described as a cheetah in a wooded area perched over a road potentially awaiting some unsuspecting human prey. Since the area is no stranger to the occasional big cat sighting, the department took the call seriously and dispatched a deputy to investigate the situation.

When the officer arrived on the scene, it didn't take long for him to realize that the curiously still 'creature' was, in fact, a stuffed animal. Recounting the call in a Facebook post, the Sheriff's Office was good-natured about the situation, observing that the description given by the witness was "spot on" and stressing that "we appreciate this neighbor for reporting what they believed was a serious concern and threat to life-safety in their neighborhood." Oddly enough, this is at least the second time this year that authorities encountered a faux feline that cause a scare in a community as, back in May, a rather sizeable armed police response was organized to take down a tiger that turned out to be a statue.